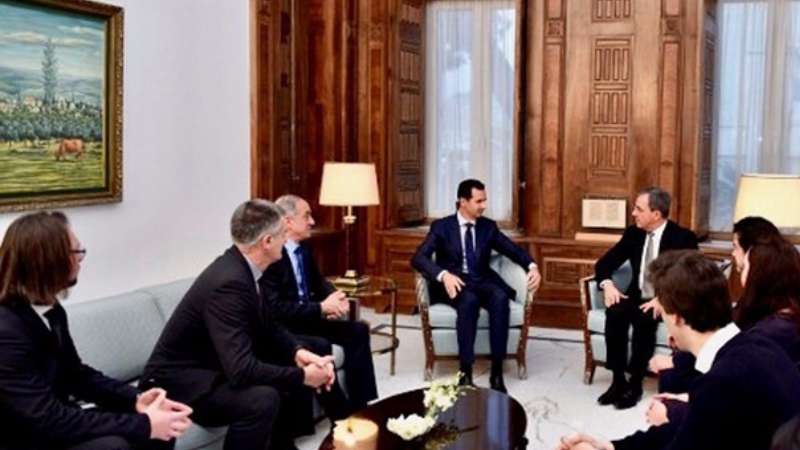 Western hypocrites sit with Assad to seek "knowledge"
__new_Underarticle_image_EN__
Eva J. Koulouriotis
Surprisingly, last Friday, three members of the French parliament visited the city of Halab (Aleppo), as an expression of solidarity to the East Christians. On Sunday, the French MPs met Bashar al-Assad. The members of the delegation, Thierry Mariani, Nicolas Dweik and Jean Lassalle, belong to the French center-right and right parties. This visit was not the first of its kind. There have been many visits of French parliamentarians to Damascus and meetings with al-Assad. This last visit to the city of Halab followed the resentment of the whole world over the crimes committed by the Assad regime, backed by thousands of Shiite sectarian militias and Russian air cover. This purely racist action hurts and does not support Christians in the Middle East, who are a minority which has always lived in peace with the Sunni Muslim majority. This visit, instead of being a support to the displaced civilians from Halab, demonstrated support of a criminal against its victims.
According to Christianity, we should uphold the oppressed and not the oppressor. Arabs say that the difference between the good and evil is a hair. However, the reality is that the difference between the oppressed and the oppressor is too big. The human mind does not accept the killing of hundreds of thousands of innocent civilians under the pretext of the existence of terrorists among them. It is the language of interests that always makes the evil good and the good evil. All religions support tolerance, peace and forgiveness. No one calls for the killing of innocent people. Yet history has shown us that in many wars religion was used as a pretext to cover the crime. Even in our times religion is used to satisfy interests and not to do good.
Whoever supports the criminal Assad regime cannot feel better inside. However, the true faces are always covered with masks and false pretenses such as the fear of terrorism and extremists.
This is especially applicable to a number of Western countries that are continuing to communicate in secret with the Assad regime in many areas and support it under the pretext of cooperation to fight terrorism.
Italy is the intelligence center of communication between the Assad regime and Europe. Gen. Dib Zeytoun, the head of one of the security directorates of the Assad regime, visited Rome last summer where he had meetings with a number of security officials from different European countries. During this visit, which lasted for three days, all parties stressed the importance of continuing the communication in intelligence matters between Europe and the Assad regime to counter the threat of terrorism and jihadi groups, since European intelligence services are aware of the relation of the Assad regime and ISIS and its ability to influence the movements of the terrorist organization. Italian relations with the Assad regime did not stop at this point. Italy has provided some of the most sophisticated equipment used in the monitoring and spying on the Syrian opposition.
__new_in_first_article1__
The growing number of refugees arriving to Germany increased the fear among the German government of the intrusion of terrorist elements belonging to ISIS within them. The German government tried to communicate secretly with officials of the Assad regime. In this context was the secret visit of Gen. Ali Mamlouk to Berlin last summer, despite the fact that his name is included in the European list of sanctions against the Assad regime. Ali Mamlouk is the head of the Syrian National Security Agency, and is responsible for many war crimes against thousands of Syrian detainees. Some sources also confirmed that a senior security official of the German foreign intelligence visited Damascus with a number of Western officials, after the terrorist attack in Paris, carried out by ISIS. This visit was made in November 2015 but it was kept secret. The most important issue discussed was the coordination and exchange of information with the Assad regime about ISIS.
The United Nations have not fulfilled their duty to stop the massacres taking place in Syria. Instead, the investigations revealed recently that the United Nations have supported the Assad regime with hundreds of millions of dollars. The Guardian published last summer a full report with details about hundreds of millions donated to organisations belonging to Assad regime or persons close to it. The investigation showed that the United Nations supported the organisation "The Achievement of Humanity" headed by the wife of Bashar al-Assad, Asma. The United Nations High Commissioner for Refugees provided, along with the United Nations Office for the Coordination of Humanitarian Affairs, aid worth $ 8.5 million for the organisation in question, at the time that Assad names were included in the list of sanctions of the United States and the European Union!
What has been previously described is a fraction of the hypocrisy shown by many Western countries towards the Syrian crisis. The security argument and the communication to confront radical terrorist organizations like ISIS, is a lie since these same countries know that al-Assad and his protector, Iran, are the source of terrorism, both in the Middle East and the West.
The Secretary of the Assad regime Parliament Khaled Aboud recently stated that "the Syrian intelligence permeated the organization of ISIS and that the Assad regime had prior knowledge of ISIS attacks in Turkey and Jordan." Western countries got this information in advance. So, why should 62 countries keep fighting ISIS while many of them are supporting and cooperating with the Assad regime, being the founder of this terrorist organization?
_______________________________
Eva J. Koulouriotis is Greek political analyst specialized in Middle East. Twitter: @evacool_f, Facebook: @evakoulouriotis