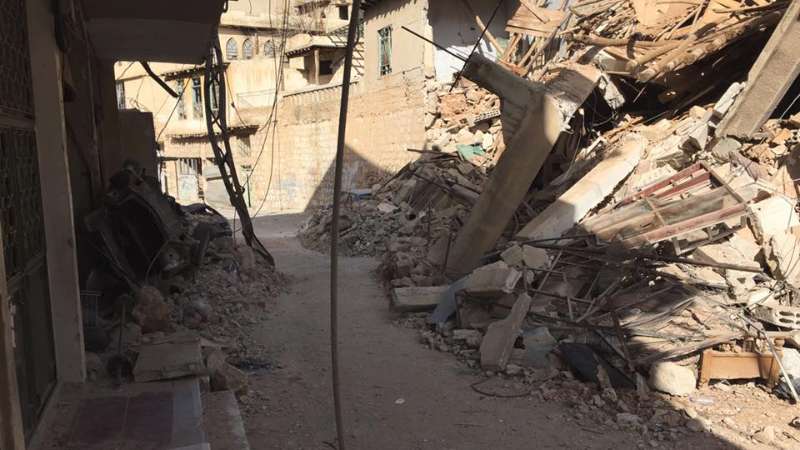 Orient Net
Hezbollah and Assad regime used Tuesday chlorine-loaded bombs in their continued attacks on the Wadi Brada valley, Orient News correspondent reported.
The Lebanese terrorist Hezbollah militia and Assad regime also made attempts to advance from the al-Jam’iyat area near Bassimah. Opposition fighters repelled the attack after destroying a tank.
On Wednesday, Hezbollah and Assad regime targeted Wadi Barada with 60 airstrikes coupled with artillery shelling and heavy machine gun fire killing six people and injuring 73.
Hezbollah and Assad regime have been attacking Wadi Barada with heavy airstrikes and artillery shelling for 14 consecutive days. They also made multiple attempts to advance on the ground, but opposition fighters were able to repel the attacks.
Local activists in Wadi Barada said Hezbollah terrorists prevented Russian military officers from entering the opposition-held villages to assess the situation on the ground and facilitate the process to repair vital water infrastructure damaged by Assad bombardment. They said the incident followed an invitation from civil groups and local figures for Russia to send observers to the valley.
On Tuesday, Assad and Hezbollah terrorists prevented maintenance workers from reaching Ain al-Fiejah spring facility to make necessary repairs to pumps and pipelines in order to resume the supply of water to Damascus and its countryside. Assad airstrikes have caused huge damage to the spring facility and water pipelines cutting the supply of water from the facility.
Civil groups and activists in Wadi Barada released Monday a written statement demanding the deployment of international observers to the valley. They said there were ready to facilitate the passage of a specialized team from the Red Cross and UN to assess the status of Ain al-Fiejah spring and document the aftermath of the attacks on the facility. The statement also called on the UN Security Council to protect Ain al-Fiejah spring which provides most of Damascus and its countryside with water.
Opposition-held villages of the valley have been under siege for months by Hezbollah and Assad regime. The humanitarian situation was already dire even before the recent offensive started 14 day ago. In addition to the bombing, people in the valley have now to endure life without water, electricity or any means of communication including landlines, cell phones and the internet. The villages also face acute shortage of food, medicine and fuel due to the long siege.
Wadi Barada, located 18 kilometres northwest of Damascus, consists of 13 villages; ten are under opposition control while three are occupied by Assad regime.
A countrywide ceasefire in Syria was declared on Thursday (29 December 2016), after Turkey, Russia and opposition fighting factions reached a deal in the Turkish capital Ankara. According to the deal, Turkey and Russia would act as guarantor countries for the implementation of the ceasefire.