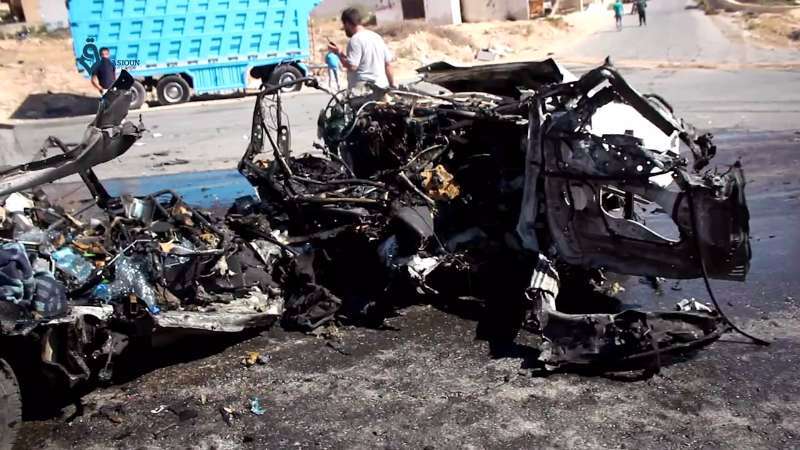 File photo
__new_Underarticle_image_EN__
Orient Net
An unmanned drone of the US-led coalition targeted Sunday a number of Jabhat Fatth al-Sham leaders and members in Idlib countryside leading to their death, while the targeted Fatth al-Sham remained silent about the incident.
An unmanned drone, which is thought to be affiliated with the US-led coalition has targeted a vehicle which was carrying members of Fatth al-Sham on Idlib – Bab al-Hawa crossing highway near the town of Sarmada, north of Idlib. The targeting led to burning the four people who were inside, according to activists.
An hour after the first targeting, another car of Fatth al-Sham was hit by the US-led coalition near Sarmada – Bab al-Hawa roundabout, which led to burning the car, activists reported.
__new_in_first_article1__
There were news reports that two leaders from Fatth al-Sham were killed, while the latter did not issue any official statement about the matter.
Statements and positions regarding the recent Turkey-Russia brokered nationwide ceasefire in Syria were contradictory whether or not it includes Fatth al-Sham.
Turkish ministry of foreign affairs said that organizations listed by UN Security Council as terrorist organizations will not be included in the ceasefire.
UN Security council listed Jabhat Fatth al-Sham (Formerly Jabhat al-Nusra) on the list of terrorist organizations in May 2013. Farhan Haq, Deputy Spokesman for UN Secretary-General, said last July that Jabat Fatth al-Sham which changed its name from Jabhat al-Nusra will still be on UN Security Council’s list of sanctions, even after it cut ties with al-Qaeda.