The uprising of a people: Why Syrians revolted

The uprising of a people: Why Syrians revolted 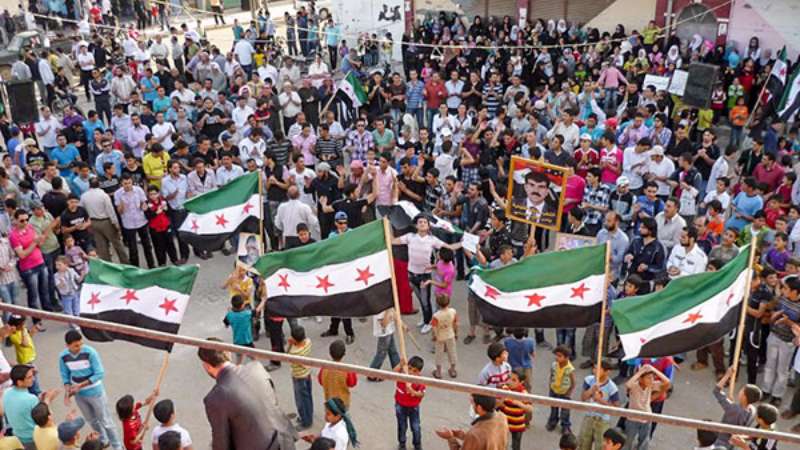 The uprising of a people: Why Syrians revolted
__new_Underarticle_image_EN__
Eva J. Koulouriotis
Watching the huge propaganda delivered by major European and US media about the Syrian crisis will make one believe that what is happening in that country is a war between several parties: First, of the Assad regime that is presented as the defender of religious and ethnic minorities, mainly Christians, against ISIS terrorists; second, the Syrian military opposition shown by the media as a group of “jihadists and terrorists” with some Syrians in the Free Syrian Army; third, the Kurdish militias defending their land from the terror of ISIS; and fourth Russia, the US and the international coalition, all fighting ISIS.
However, the Syrian ground tells a completely different story. The Assad regime “forces” have been way outweighed by groups of terrorists like Hezbollah and sectarian Shiite militias from Afghanistan, Pakistan, and the terrorist IRGC fighting under the Mullah Regime banner. There are also militias directly connected to the Kurdish PKK terrorist group which aim at cutting a part of Syrian territory to make a state for them, in which they represent only 30% of the population. On the other side, there is the Syrian military opposition (the Syrian people) defending their land, their homes and their freedom.
Why Syrians revolted
Syria has lived for centuries in a state of peace and security, as well as co-existence and love among the various religious communities. Christians have been living in Syria for nearly two thousand years in a peaceful coexistence even after Sunni Muslims became the overwhelming majority of the population about 1400 years ago. Sunni Muslims proved to be tolerant to all religions and all ethnic groups. So, what went wrong in the past half a century in Syria? And, to be more precise, why have Syrians revolted in 2011? I will explain in this article some issues that westerners are not aware of, which led to birth of the Syrian revolution.
The grip of the Assad regime security was brutal against the people and anyone who called for reform. The regime has created throughout almost 50 years a deep security system that controlled all aspects of ordinary people’s lives.
The Assad regime did not allow any kind of political opposition types or partisan movements. The security branches had the mission to pursue individuals or political groups and arrest them before trying to show some sort of political pluralism. There are many examples of Syrian politicians from various religious and ethnic backgrounds who have been arrested for decades. George Sabra, who is Christian, was detained for eight years in prison for the establishment of an opposition party.
__new_in_first_article1__
The Assad regime prohibited all forms of freedom of opinion and of the press. The ruling Baath Party took control of all local newspapers, and closed many social media outlets. It even reached the point of arresting a famous artist because he laughed at a joke mentioning one of the Assad family members and keeping him in prison for years on charges of belonging to the Muslim Brotherhood, despite being a Christian!
The Assad family seized control of the whole structure of the economy in Syria, with the cooperation of some security officials. Assad the father removed from the government’s budget all revenues from oil exports. These are in billions of US dollars which went mostly to European banks in the names of the Assad family. The cousin of Bashar Assad, Rami Makhlouf, controlled all commercial projects in Syria. Any investor, in order to materialize his investment in the country, should bribe him up to 40% on the project’s budget. Moreover, 80% of the government spending was directed to support the Syrian Ministry of Defense, but most of these funds disappeared into the pockets of some security and military officials close to the Assad family. This corruption was widespread in all government agencies, so that every official asked for bribery because of low salaries, thus destroying government administration.
Regionally, the Assad regime is the reason for instability in the whole Middle East region. It is the main supporter of the Hezbollah terrorist militia in Lebanon which has been the reason for instability in Lebanon in the past 20 years. The Assad family regime has contributed in planting sectarian strife and the creation of ISIS in Iraq after the US-led war in 2003. It is also the under-the-table supporter of the terrorist PKK and its affiliates.
Having said this, I want to pose the following question to the Western defenders of the presence of Assad and his regime in power: If you were forced to live under such conditions and accept the inhibition of expression and showing your antithesis and anger on the steps of the government, lived on a monthly salary that does not exceed 50 USD, denied the right of choosing your president, government and members of parliament in your country because they have been picked by security branches, would you remain silent?
________________________________
Eva J. Koulouriotis is Greek political analyst specialized in Middle East. Twitter: @evacool_f, Facebook: @evakoulouriotis