Syrian chef serves up slice of home in Greek camp 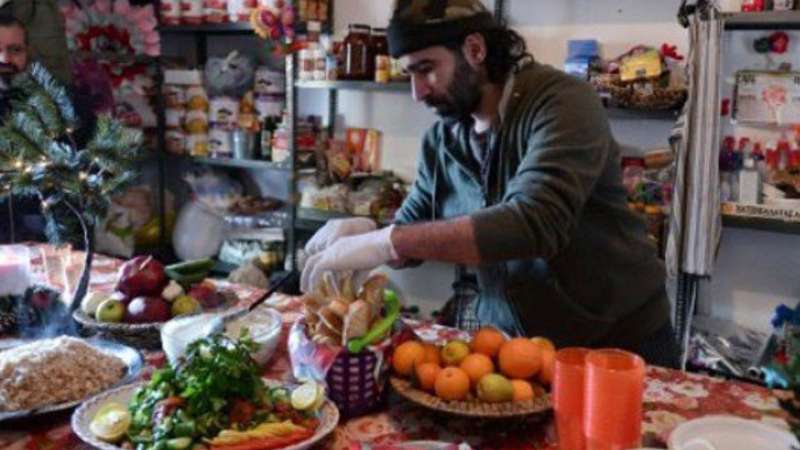 Orient Net - Tribune
Before braving a ‘trip of death’ to escape Syria, Talal Rankoussi was a chef in a Damascus restaurant considered the largest in the world.
Bawabet Al Dimashq — Damascus Gate — still holds that distinction in the Guinness Book of Records as it can seat over 6,000 people.
So when 41-year-old Talal was asked by a US benefactor to spice up the meals for several hundred fellow Syrians at the Ritsona camp near Athens, the two-decade culinary veteran did not hesitate.
The father of three, who crossed the Aegean in February in “a trip of death, riding a plastic tire in an ocean under the rain”, says the food handed out in the camp “is under-cooked…with no regard to improving the quality.”
Like most refugee camps in Greece, Ritsona receives daily meals from catering companies commissioned by the army.
But in terms of quality and nutritional value, it “just covers survival needs,” says a camp operator who declined to be named.
Enter ‘Madame Sharba’
Then came Carolynn Rockafellow, an American former investment banker who moved to Greece last year after a 30-year career, including two decades at Credit Suisse.
Rockafellow, originally from New York, has taken a personal interest in the well-being of Ritsona’s 700 refugees, nearly half of them children.
With personal funds and donations from friends, Rockafellow - whose nickname around the camp is Madame Sharba, or Mrs Soup - has created Cafe Rits, offering alternative cuisine out of one of the camp’s few brick-and-mortar buildings.
“I feel this story is as much about helping the Greeks as it is about helping the refugees,” Rockafellow says over the sound of Talal furiously chopping vegetables.
Several times a week, she and a few helpers drive out to a supermarket on the nearby island of Evia and load a van with supplies for the day’s meals, plus meat and vegetables for camp families to do their own cooking.
“Everyday we have distribution of either vegetables, meats or cooked meals. Meat once a week, vegetables twice or three times a week, cooked food twice a week,” says Talal, now keeping a close eye on a bubbling cauldron of onion broth.
Staple Syrian recipes include kibbeh, fattoush salad, maqluba rice, muhammara dip — mostly made with locally sourced ingredients, and all a far cry from what Greek catering services can provide.
‘Bring back their culture’
Cafe Rits is like an over-sized food truck, without the wheels.
The walls are lined with pots, pans, tins and cutlery. A long bench where the food is prepared cuts across the room, while gas-fired stoves stand near the entrance.
Water is brought in a plastic tub as there is no piping. Or heating.
“I wanted to find a way to empower refugees, to bring them back their culture through food,” says Rockafellow.
“Syrian people love to offer hospitality and something of themselves through food,” she added.
The dozen-strong volunteer team also prepares lunch bags for around 80 of the camp’s children who take afternoon classes at nearby schools.
“We also host parties. It’s important to laugh… and to remember that this, too, shall pass,” she says, adding that she wants to use her experience to help her refugee volunteers find jobs once they leave Greece.
Talal, who reached Greece in February after a poor experience trying to find employment in Turkey, has applied for asylum in several European countries including Germany, Holland and France.
But he would have “no problem” dishing out to patrons in a Greek establishment if given the chance.
“This is my interest. This is my job,” the stoic chef says with a smile.