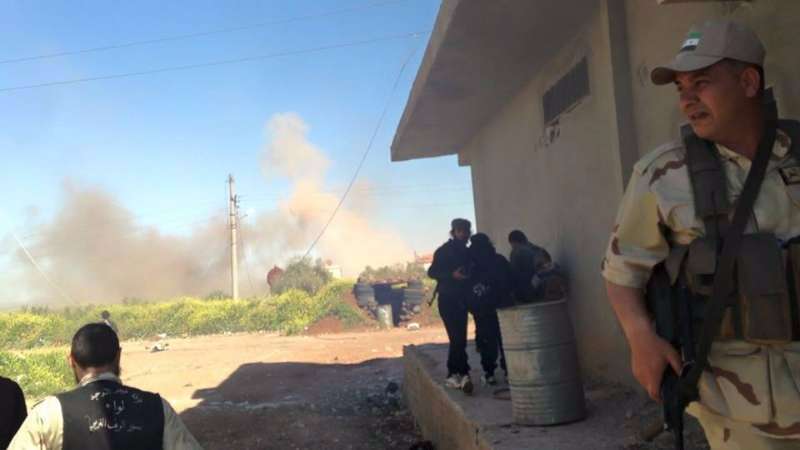 Opposition in Sanamayn didn’t agree to regime ’reconciliation’
Assad media spread on Sunday rumors about opposition fighters’ ‘surrender’ of their weapons in al-Sanamayn city in Daraa northern countryside claiming that Assad regime has made a ‘reconciliation’ in al-Sanamayn.
Al-Sanamayn’s Media Center published what really took place, refuting the regime’s account of the story.
Reconciliation committees in al-Sanamayn agreed with the city’s population to buy about 80 rifles at their expense to hand them to Assad regime hoping that the latter would release the biggest number possible of the city’s detainees.
__new_in_first_article1__
Assad regime, however, cut off the city’s water, power and communications and released five detainees only, according to al-Sanamayn Media Center.
Meanwhile, opposition fighters’ factions in Sanamayn refused any ‘reconciliation’ or handing over any weapons to Assad regime. These factions include Shuhadaa al-Sanamyn Brigade, Shu’let al-Thawra Brigade, Shuhadaa al-Sanamyn Battalion, and other smaller groups.
Al-Sanamayn is considered a military zone. It serves now as a point of Assembly for Assad terrorists as it contains a number of Assad regime’s military regiments, the most important of which is 9th Division, the biggest military division in Daraa, in addition to a number of security branches and military residences. Opposition fighters, however, are mainly located in western and northern neighborhoods of the city.
قيم هذا المقال