Why America was bound to fail in Syria 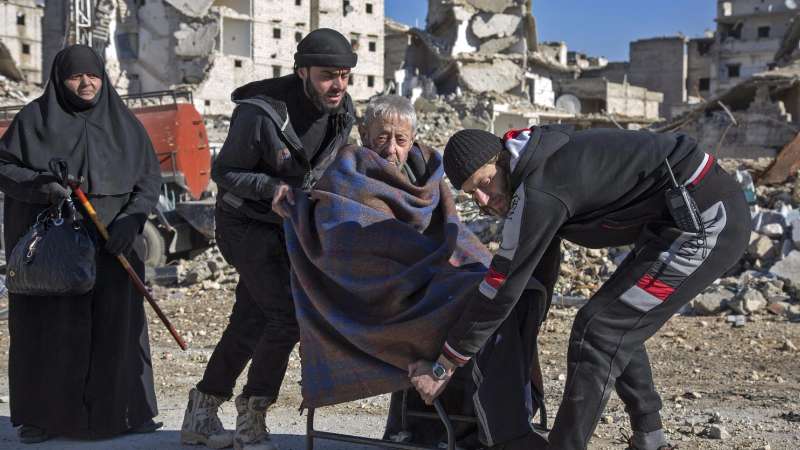 An elderly Syrian man is evacuated Aleppo (Agence France-Presse via Getty Images)
Orient Net - Washington Post
The fall of Aleppo is a human catastrophe. It’s also a demonstration of the perils of choosing the middle course in a military conflict. Sometimes it’s possible to talk and fight at the same time. But in Syria, the U.S. decision to pursue a dual-track, halfway approach made the mayhem worse.
A battered Secretary of State John F. Kerry made one more plea Thursday for a peaceful evacuation of what’s left of Aleppo. At a State Department briefing, he used the strongest language to describe the situation: “Another Srebrenica . . . nothing short of a massacre . . . indiscriminate slaughter . . . a cynical policy of terrorizing civilians.”
But for five years, the United States’ actions haven’t matched its rhetoric. Kerry’s only real weapon now is the gruesome suffering of the Syrian people and the shame it engenders in everyone who watches. That shame hangs over this administration, too.
Kerry’s critics argue that his efforts to negotiate a settlement were always doomed to failure. Maybe so, but after the Russian military intervention in September 2015, the administration concluded that diplomacy was the only viable strategy in Aleppo. Having made that decision, officials needed to make it work. Instead, they continued to toy with an armed opposition they weren’t prepared to fully support.
In the annals of covert warfare, the CIA’s support for the Syrian opposition deserves a special, dark chapter. The effort began late — nearly two years into the war — after extremists had already begun to dominate the fight against the head of the regime Bashar al-Assad. It was a hodgepodge of regional states and their pet fighters — nominally coordinated from operations centers in Jordan and Turkey but in reality controlled by more than 80 local militias whose commanders were often corrupt and proto-jihadists themselves.
The CIA and its partners were never willing to give the opposition the weapons — especially the shoulder-fired antiaircraft missiles — that could have won the battle. The agency did provide anti-tank weapons that were potent enough that Assad was rocked in the summer of 2015, and analysts began to worry about “catastrophic success,” with the regime collapsing and jihadists filling a power vacuum in Damascus. Soon after that, Russia intervened.
The CIA’s biggest problem was that its allies couldn’t stop the dominance of al-Qaeda’s Syrian affiliate, Jabhat al-Nusra. The “vetted” opposition groups might pretend otherwise, but they were fighting alongside Jabhat al-Nusra, which rebranded itself this year as Jabhat Fatah al-Sham. The extremists attracted the other opposition groups for a simple reason: Their fighters were the most willing to die for the cause.
The United States tried to straddle this problem. In 2014, I visited the leaders of one of the vetted groups, known as Harakat al-Hazm, at a safe house along the Syrian-Turkish border. The fighters were despondent. The United States had just bombed a Jabhat al-Nusra camp nearby, seeking to kill militants from its so-called Khorasan Group. The CIA-backed fighters said this action had destroyed their credibility. They were right. Jabhat al-Nusra soon chased them from their headquarters.
Kerry was an early advocate of using military force against Assad. But after the Russians intervened decisively last year, he began to regard the CIA program as a hindrance to the diplomatic deal that he saw as the only realistic option. Kerry didn’t want to abandon the “vetted” fighters altogether, and he argued for giving some groups more weapons. But he thought the United States should make continued assistance conditional on their willingness to separate from Jabhat al-Nusra — something that few of the groups were willing or able to do.
So the straddle continued. Kerry met frantically through this year with his Russian counterpart, Sergei Lavrov, to implement the “cessation of hostilities” negotiated on paper last February. The CIA meanwhile continued to push a program that targeted Russia and its Syrian and Iranian allies — and helped shield Jabhat al-Nusra.
Kerry negotiated a near cease-fire in September, but it was conditioned on a pause in fighting — demanded by skeptics at the Pentagon — that neither he nor Lavrov could deliver. The Russians didn’t restrain Assad or the Iranians. And Kerry couldn’t deliver on his promise to separate the “moderate” opposition from Jabhat al-Nusra. The opposition forces, good and bad, were “marbled” together in the Aleppo region. The United States couldn’t undo the anti-Assad alliance it had fostered.
Kerry had the impossible job of trying to manage a policy that was going in two directions at once. Perhaps he should have quit, if he sensed it was undoable. But it’s Kerry’s strength and weakness that he believes he can move mountains. Not this time. Instead, he got crushed in the rubble of a confused policy.
David Ignatius (Washington Post)