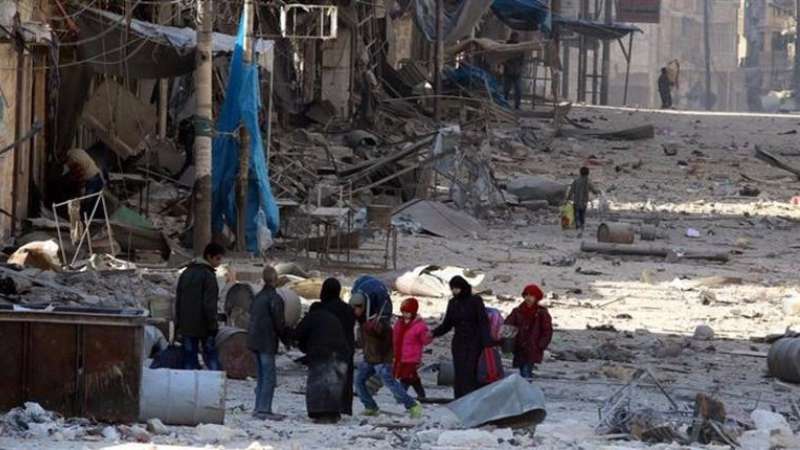 Hezbollah militias block civilians’ evacuation from Aleppo
Feelings have been mixed for many Syrians as they watch events unfolding in a small area of Aleppo’s Old City in the past few days.
Internet and cellular connections have been sporadic and every time contact is lost with a family member or friend, those living on the outside try hard not to fear the worst.
In spite of an agreement between Russia and Turkey, that includes a ceasefire to facilitate the evacuation of Syrian families who have been trapped in an increasingly shrinking area of the Old City, foreign militias from Lebanon and Iran have been doing their best to disrupt and abort efforts of the International Federation of Red Cross and Red Crescent (IFRC) to move the war weary Syrians to safety.
Such was the case when a convoy of civilians was reported detained on Friday by Hezbollah militia members from Lebanon who have been fighting alongside the Assad regime’s forces.
Later in the day, one man still inside Aleppo’s Old City waiting to be evacuated sent a recording to the outside world conveying the story told by a distraught detainee who has since been released.
The Syrian man, who had been humiliated and his spirit broken by foreign Hezbollah and Iranian militia terrorists while attempting to leave his own city, told of how their wallets and all their identity papers had been confiscated and their wives stripped of their jewelry in an act that defies international humanitarian law concerning acceptable treatment of evacuees.
The anonymous man had been traveling in one of twenty cars and buses that were accompanied by Red Crescent and International Red Cross escorts and had already passed through a Russian checkpoint when they encountered another checkpoint set up by Hezbollah terrorists.
The transport convoy was forced to stop at the improvised checkpoint which had been set up on the Ramoseh Bridge, the main entrance and exit point for the city of Aleppo.
__new_in_first_article1__
As they sat there they were surrounded by tanks that began shooting in the air to frighten them into cooperating.
The transport caravan’s Red Cross and Red Crescent escorts were ordered to leave the area, leaving Syrians who had just been brought out of their besieged neighborhood in the hands of foreign Hezbollah terrorists.
The militia terrorists then ordered everyone to exit from the buses so they could be stripped of their clothing, searched, interrogated and their possessions confiscated.
One Syrian opposition member who was traveling with his wife was killed for resisting. He was shot to death in front of his pregnant wife while trying to protect her from their abuses. After he was killed, the courageous man’s wife was taken back to the regime controlled area of west Aleppo and her fate is so far unknown.
A number of men were killed before the rest of the evacuees were released and Hezbollah terrorists refused to allow their bodies to be taken by their families.
Mulham Akidi, an officer of the Free Syrian Army, said that Hezbollah terrorists also confiscated ambulances and cars belonging to the Syrian Civil Defense before sending the rest of the detainees back to the besieged area of Aleppo.
Salah al-Ashkar, Syrian activist from the Old City of Aleppo, was following at the rear of the convoy and turned back when he saw what was happening.
He had shared videos via Twitter with the hashtags #Syrian_Alienation and #Aleppian_Alienation early in the day on Friday in which he talked about the bitterness and sadness of being forced to leave his hometown.
__new_in_first_article2__
International media has consistently failed to communicate the fact that many Syrians still living in the besieged area have remained by choice.
In reality the majority of those now being forced to leave had decided long ago that they would not be forcibly displaced from their homes and the city that so many of their family members and friends have died in.
In his videos Salah made it very clear that if or when he left Aleppo, it would definitely be against his will.
“We asked to live in a free and democratic country, a country that is for everyone,” he said in one of his recent videos. “We asked to remove al-Assad. We don’t want Syria al-Assad’s way.”
A view captured by his video from a rooftop showed huge numbers of civilians huddled together in the street waiting for the moment they would be picked up and transported to a safer area in the opposition held countryside of the province of Idlib.
“No one supported us, or even helped us,” said Salah. “And as you can see, we are being kicked out of our city… out of Syria.”
“I will go out of Aleppo. [But] I am a son of Aleppo, a son of Aleppo and a son of Syria. I will go out of Syria and I don’t want to.”
“I don’t want to leave!”