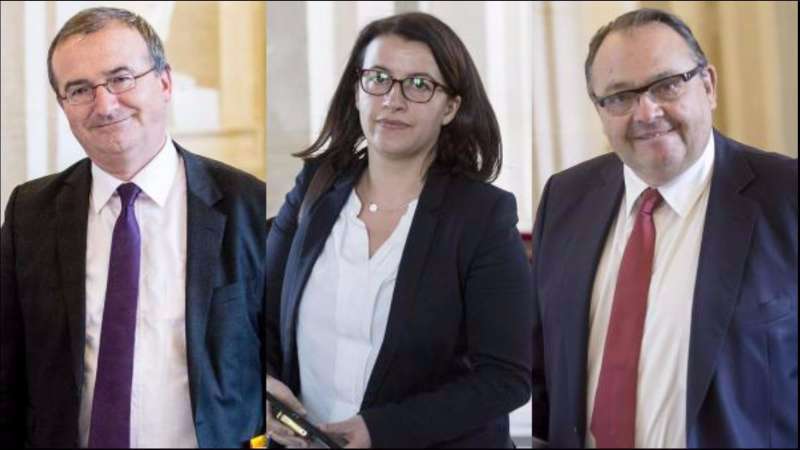 French MPs, from left to right; Herve Mariton, Cecile Duflot, Patrick Mennucci
A French parliamentary delegation, of a number of political and municipal figures, arrived on Sunday in Turkey’s southern province of Gaziantep preparing to head on Monday to the Syrian besieged city of Aleppo.
The French delegation is calling for a ceasefire and for the evacuation of civilians from Aleppo, which has been recently under intense indiscriminate bombardment by Assad regime and the Russians, in their three-week campaign launched to fully capture the city.
Brita Haji Hassan, Head of the Local Council of Free Aleppo, who accompanied the delegation, told Orient Net that the delegation includes a number of French parliamentarians and officials who are going to head to Aleppo on Monday, trying to lift the siege and bring about a ceasefire.
__new_in_first_article1__
This step comes to make the international community assume its responsibilities and take measures to stop the humanitarian crisis in the besieged city, Haji Hassan added.
The delegation includes MPs Cécile Duflot, Hervé Mariton, and Patrick Mennucci, in addition to Jacques Boutault, the Mayor of the 2nd district of Paris.
The French delegation wants to express solidarity to the residents of Aleppo, as the latter feel abandoned by the international community, according to the media coordinator of the delegation.
The French MPs want to remind Europe that it has to adopt a firm stance towards the massacres perpetrated by Assad regime and its Russian ally, who are following the policy of scorched earth against thousands of civilians.
قيم هذا المقال