Inside east Aleppo’s last hospital: ’No space to walk’

Inside east Aleppo’s last hospital: ’No space to walk’ 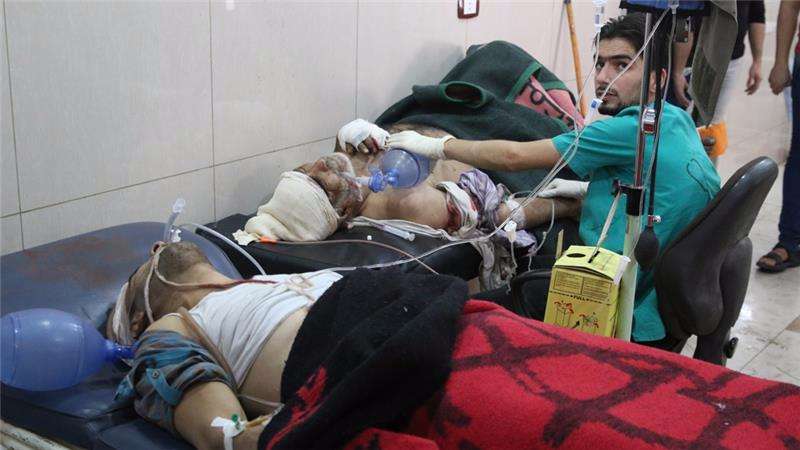 Inside east Aleppo’s last hospital: ’No space to walk’
__new_Underarticle_image_EN__
Orient Net - Al-Jazeera
The "last hospital" in east Aleppo is a grim site. The building is crowded and the injured lay all over its corridors. Blood lines the floors, and its smell - along with the sound of screams and cries - fill the air. Much of the surrounding area has been destroyed.
"It’s a small hospital, but it’s accepting lots of victims and the wounded daily, because it’s the only hospital left in the city. This is putting a lot of pressure on it," Dr Hamza al-Khatib told Al Jazeera.
Al-Khatib is one of a handful of doctors remaining in the rebel-controlled eastern part of Aleppo. He says that his hospital, whose name Al Jazeera is not releasing for security reasons, is "the only one left standing" after a massive bombing campaign by Assad and Russian jets, that began on November 15, knocked at least five other hospitals out of service.
"The building has been targeted; shelling from planes hit two sections and demolished one. But, thank God, not much has happened to the patients. Two died and a few others were injured," said al-Khatib, referring to the recent bombings.
With the regime’s advance still in full force, the hospital is struggling to provide care to the hundreds of victims of the daily bombing.
The hospital’s challenges are numerous, as medical staff struggles with damaged equipment, lack of space for the wounded and an insufficient amount of supplies - not to mention the risk that hospitals too will be bombed. "Planes bomb the area surrounding the hospital pretty much every day, and we don’t know when the hospital itself will be hit," al-Khatib told Al Jazeera.
__new_in_first_article1__
Hudhaifa Dahman is a medical assistant, and he likewise sees the grave situation at the hospital.
"Most of the patients are on the ground. There’s no space to walk. It’s the first time I’ve seen it like this," said Dahman, who has worked at the hospital since the start of the popular uprising against the Assad regime in 2011.
The wider situation of healthcare in east Aleppo is similarly desperate after several hospitals closed. "They are trying to rebuild, but I doubt they can be rebuilt quickly. The machines that were destroyed will not be replaced because nothing is coming in due to the siege," Teresa Sancristoval, an emergency programme coordinator for Doctors Without Borders (MSF), told Al Jazeera.
"People rehabilitate in houses. But as you can imagine, it’s not the same as a hospital. It’s a minimum level of care," said Sancristoval. "Victims of the bombing need intensive care units (ICUs) and machines that can’t be provided in a small space," Sancristoval stated.
And the problems are nothing new. East Aleppo’s hospitals have suffered from airstrikes, staff shortages and insufficient supplies regularly in the past year.
The bombing of east Aleppo is part of a major offensive by the Assad regime – aided by Russia and other allies – to establish control over the entirety of Aleppo.
For now, the hospital’s staff is determined to provide around-the-clock care to an east Aleppo that is literally crumbling around them. "Work is 24 hours," said Dahman. "If we get a break, it’s just to sleep or eat a small meal."