Assad regime: Killing by all means 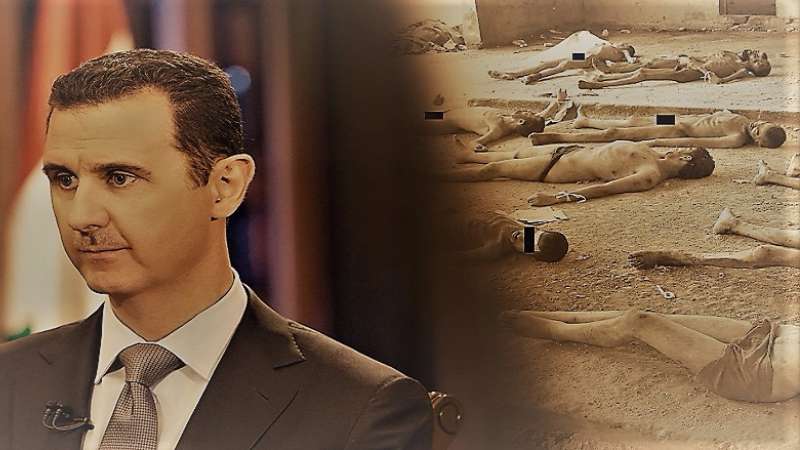 Assad regime: Killing by all means

During the previous six years, the Assad regime used all means to stop the Syrian Revolution. Day after day, it is inventing more criminal ways to prove to the world that it is more Nazist than the Nazis themselves, and more terrorist of all on the planet since the beginning of the history of terrorism so far.
It started with political arrests at the beginning of the demonstrations. Then, under the command of security branches, moved to shooting people in order to break up peaceful demonstrations. Then, it moved to the stage of the use of the army with heavy weapons, tanks and air force against the rebellious areas. It was not even bothered by the American red lines or international treaties on the use of chemical weapons like sarin, mustard and chlorine gas. Then, it re-used the Nazist weapon of the siege of cities and towns, depriving the people from all types of food, water and medicine to subjugate them.
Then, we thought that there could be no worse than what had happened. But the regime surprised us dis-obligingly with the use of an even newer weapon: demographic change of Sunni areas, starting from the old Homs to Darayya, Hame, Qudsaya, Madaya, Zabadani. So, the Russians gave the idea to apply the same method to the eastern part of the city of Aleppo.
Killing by using bombs indiscriminately
Assad forces target the opposition areas by inaccurate weapons intending to kill as many civilians as possible and create horror and fear in the hearts of those who survive. The regime mainly uses mortars, heavy artillery and tank shells known as inaccurate military weapons, but the most disastrous are the barrel bombs.
Barrel bombs are filled with TNT and metal parts and in some cases, toxic chemicals such as chlorine. The invention of this deadly weapon was made at the Higher Centre for Scientific Research in Damascus by Assad and Iranian military experts. A barrel bomb can destroy a six-storey construction, but if it contains chlorine, it can kill everyone within 100 meters of range from the point it landed. It is a simple weapon that cannot be redirected, but rather randomly thrown from helicopters from a height up to 5 km over opposition areas, to kill the largest possible number of innocent people.
Killing by using chemical weapons
__new_in_first_article1__
Assad regime has used chemical weapons more than 150 times and is still so far using them against civilians and opposition forces. The Ghouta Massacre on the 21st of August 2013 is the most murderous in terms of the quantity and quality of the materials used and the number of victims. In this massacre, 1,466 civilians died, most of them children and women, and 3,600 people were taken to hospitals for treatment of suffocation. The Assad regime used in the massacre deadly sarin gas that destroys the nervous system. After that incident, there was an agreement between the United States and the Assad regime through Russian mediation that Assad regime should hand over all chemical arsenal to be destroyed by experts from the United Nations. Yet, the recent United Nations reports confirm that the Assad regime has used these weapons in more than three other sites after that agreement. There is also information that the Assad regime continues to make chemical weapons in special laboratories in Barza, as part of the Higher Centre for Scientific Research in the capital Damascus.
Murder by torture
The whole world has viewed the leaked horrific images of torture, taken in Assad regime’s prisons: 50,000 photos including women and children, who were killed after severe torment and pain that their bodies have not been able to endure. The UN reports indicate the presence of more than 80,000 prisoners in Assad’s prisons and on a daily basis 10 to 20 people are killed in those prisons. However, a former detainee in the Assad regime’s military security branch, who miraculously survived, told me that the numbers are much higher. He was positive that the number of detainees in the various security branches in Damascus alone is 90,000 prisoners, while in the branch of military security detention centres alone more than forty people die daily. The criminality of this regime can only be compared with the Nazis, even worse.
Murder by starvation and blockade
Currently in Syria, there are more than ten areas affiliated to the Syrian opposition are under siege. In these areas, more than 900,000 civilians are suffering from hunger, thirst and lack of medical materials. In Madaya, in the west of Damascus, more than 20,000 civilians live under siege for more than a year. Because of hunger and lack of medicine, more than 150 civilians have died so far, mostly children. For more than two months, the eastern part of the city of Halab (Aleppo), with a population of more than 325,000 civilians suffer from the criminal blockade without food and medical supplies and now without hospitals which have been destroyed by Assad-Russian airstrikes. Assad forces and sectarian militias loyal to him, in addition to the Russians, rejected all the calls from the UN, the EU and the US to allow aid convoys enter eastern Halab. Other areas like the Yarmouk refugee camp, Zabadani, Buqeen in Damascus countryside, al-Wa’er in Homs and many towns in Eastern and Western Ghouta are also suffering under siege by Assad regime.
Every day in Syria there are more than 100 civilians killed, among them children, women and elderly, by one of the terrorist means previously mentioned. The world is watching, evading its responsibility towards what is happening there. America is preoccupied with ISIS which was created by the Assad regime, and Europe is so much busy in dealing with the refugees who fled Assad oppression and terrorism. How long will the source of terrorism remain a party to negotiate rather than being in a cage before the International Criminal Court for war crimes?
_____________________________
Eva J. Koulouriotis is a Greek political analyst specialized in the Middle East. Twitter: @evacool_f, Facebook: @evakoulouriotis
قيم هذا المقال 8 0