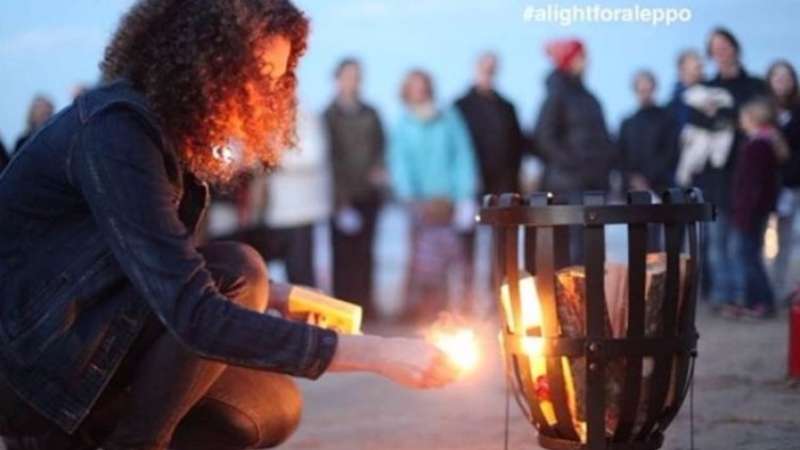 Lights for Aleppo
Around the world, activists have been busy tweeting for the embattled Syrian city of Aleppo.
Hashtags such as #SaveAleppo and #StandWithAleppo have been tweeting around the globe 24 hours a day in an attempt to draw attention to the brutal bombardment by the Assad regime and Russia of Syrian civilians living in the liberated areas of east Aleppo.
While tweets and lighting candles are not likely to bring an end the bombing it brings comfort to those trapped inside the city to know that they are not forgotten and that humanitarians around the world support them and are aware of their suffering.
In Scotland, a trail of beacons has been lighting up both sides of the Firth of Forth, the firth being the estuary where Scotland’s River Forth empties out into the sea.
The lights have been placed there as a gesture of hope and solidarity with the besieged residents of what used to be Syria’s largest city and its economic hub.
The beautiful Scottish message of hope will be spread around the world by way of social media and the hashtag #alightforAleppo.
__new_in_first_article1__
As well as being a show of support for Aleppo’s besieged inhabitants, the light display is also being used to raise funds that will be donated to help them.
The initiative was organized by the Edinburgh University chaplaincy with the goal of raising funds for Oxfam and Medicins Sans Frontieres (aka Doctors Without Borders),  charitable organizations that are working in the region.
Members of the public are being encouraged to attend an event, organize an event of their own or light candles in their own homes to show support for Syrians under siege.
Rev Dr Harriet Harris, Edinburgh University chaplain, told the BBC: "Every day the people of Aleppo have less food and fewer medical supplies, and aid is not getting through.
"We want them to know that they are not forgotten - the people of the world are watching and are upholding their humanity.
"We are helpless to deliver food, medicine or peace, but we will light beacons to send a message of solidarity and hope to stem despair and renew resolve."
قيم هذا المقال 17 0