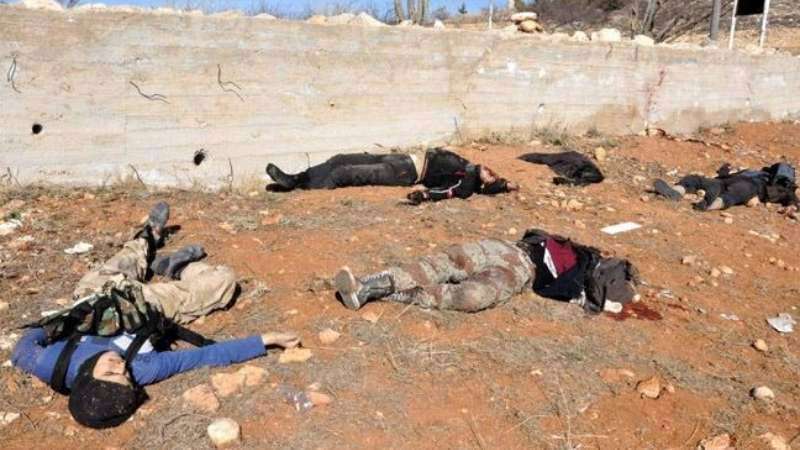 Orient Net
Dozens of Assad terrorists were killed in Damascus eastern countryside on Friday in a counterattack by Jaysh al-Islam, coinciding with the ongoing battles on the outskirts of Khan al-Sheeh camp in Damascus western countryside.
Dozens of Assad terrorists and their supporting Shiite mercenaries were killed after Jaysh al-Islam launched a counterattack by which its fighters were able to recapture the lost-to-Assad positions on Meda’ani axis in eastern Ghouta, the media office of Jaysh al-Islam confirmed.
Jaysh al-Islam said that its fighters were also able to destroy an Assad BMP vehicle and a Shilka vehicle, amid retreats among the ranks of Assad terrorists.
Attack-and-retreat battles are taking place in Damascus eastern countryside as Assad terrorists, backed by Shiite and Palestinian mercenaries, try to storm Douma from multiple axes, especially al-Reyhan, Meda’ani, Tel Kurdi, and the side of Damascus Central Prison.
This comes as Assad jet fighters intensified on Thursday aerial bombardment on the towns and villages of Damascus eastern countryside. The attacks left 8 civilians killed, including a woman and a child, in addition to wounding tens of others.
In Damascus western countryside, clashes between opposition fighters and Assad terrorists continue on the outskirts of Khan al-Sheeh camp. The area was targeted with 18 surface-to-surface missiles and about 40 barrel bombs, while Assad artillery targeted al-Kabosyya Hill and the UNRWA-sponsored Berya School, according to SMART news agency.
Khan al-Sheeh witnesses a crippling siege laid by Assad terrorists, who have blocked the road connecting it with Zakiye, preventing food supplies especially flour from entering Zakiye, whose bakeries have stopped since the beginning of the current month.