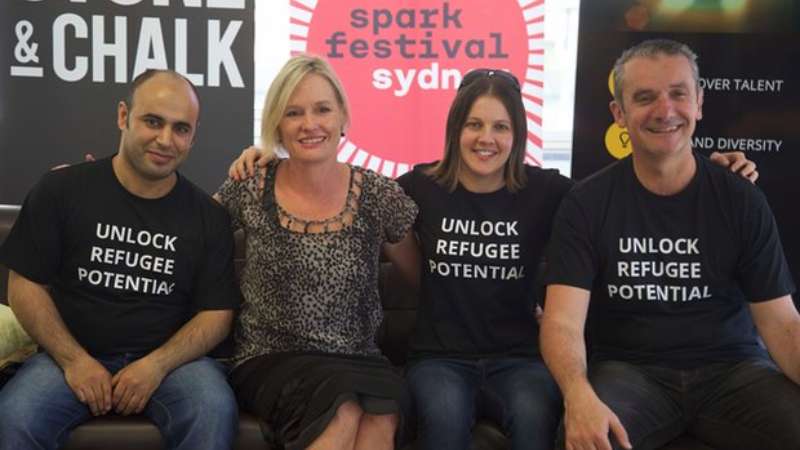 Just 14 months ago Nirary Dacho was a penniless refugee, landing at Sydney airport with a dream of being able to continue his career as an IT analyst in a country where he would be safe.
Today the 29-year old Assyrian sits in a comfortable office as the cofounder of Refugee Talent, a fast-growing digital platform that exists to get refugees into work.
This has been a rapid turnaround in fortune – especially considering 48% of those on humanitarian visas remain unemployed 18 months after arriving.
Dacho has been able to break free from the traps that frustrate other refugees, thanks to a combination of lucky breaks and his ability to make good connections.
When Dacho arrived from Syria, via Lebanon, on a humanitarian visa with his parents, brother and sister, he could speak English, had a master’s degree in web science and more than eight years of working in IT and teaching programming at university in Syria.
Even so, he found it impossible to break into the employment market, despite updating his skills to Australian qualifications.
“My qualification was from overseas and I had no work experience in Australia and these are two of the main barriers for employment for refugees,” he says.
Dacho applied for more than 100 jobs in his first eight months before getting his first lucky break – which involved starring in a television news segment.
__new_in_first_article1__
When the ABC’s Lateline program was preparing a story on unemployed refugees, the assistance organisation, Settlement Services International, nominated Dacho as a client to be profiled.
After it was screened, 10 employers lined up to offer him work and help. With a three-month contract as a software engineer with the technology company Dolby Australia, he was getting local experience that seems a prerequisite for most employers.
It was an exciting development, however Dacho was nowhere near elated. “It was such a bad feeling,” he says, explaining that he was thinking of the thousands of other refugees still waiting for their lucky break.
“They are also qualified and have long years of experience and they are sitting there, doing nothing. I was happy because I finally got a job but, the other side of it, [I] felt so bad.”
Dacho’s second stroke of good fortune came 12 months ago when he attended a networking event for refugees with IT skills – Techfugees Hackathon Australia – and met Anna Robson, who became his cofounder and the chief executive of Refugee Talent.
Robson had spent 10 months working at the Nauru detention centre as an adult recreation officer and the two of them bonded over their desire to help refugees get work experience. Robson decided to join forces with Dacho to build an online platform to connect refugees to employers. The site launched in February.
The third time fortune smiled upon them was in March this year when Robson, moonlighting as an Uber driver, started chatting about her venture with an investor she was taking to the airport.
That passenger was Jason Yat-Sen Li, the chairman of Vantage Asia Holdings, a diversified investment group with offices in Beijing and Sydney and interests in real estate, mining, financial services and technology. Li is also a former Labor candidate for the seat of Bennelong.
“I asked her what she did when she wasn’t driving an Uber,” says Li, who was moved by what she had to say about her work with Save the Children on Nauru.
__new_in_first_article2__
“The thing that caught me the most, apart from the awful things she saw there, was her observation that the vast majority of the people who were locked up there were highly skilled. They were doctors and engineers and software developers.”
Li became an investor in Refugee Talent, offering Dacho and Robson free space in his Sydney Surry Hills office, business start-up advice and introduction to his business connections.
“The story and the serendipity of it appealed,” Li says. “It is a really nice thing in the innovation space where one can do something that reflects one’s values and hopefully do well out of it as well. We do think it has the potential to be a viable business.
“They sit with us in our office so, whenever they have questions or problems, they come to us. I chair their board and have helped them to put together a small board of directors. I have helped them raise a little money to get them started and they use some of our in-house resources, like an in-house designer.”
Refugee Talent now has 50 employers on board, has 160 clients and has placed 15 in jobs in its first eight months. The company has expanded to Melbourne and is looking at other states.
Dacho says the duo never expected things to happen so fast, thinking it would take two to three years to get to the point where they are now at 11 months, with both being employed full-time by the business.
“I am so lucky because I have these three moments in Australia,” he says, referring to his lucky breaks.
His advice to other refugees would be to take the initiative, rather than depending on case workers and assistance organisations. They should also get Australian qualifications as soon as possible and try to get any job (to get local experience), using refugee-assistance channels or applying direct to employers.
And drawing upon his experience, they should also make the effort to meet as many people as they can to build up a network.
قيم هذا المقال 5 0