The battle for Aleppo: Do rebels have a chance to succeed?

The battle for Aleppo: Do rebels have a chance to succeed? 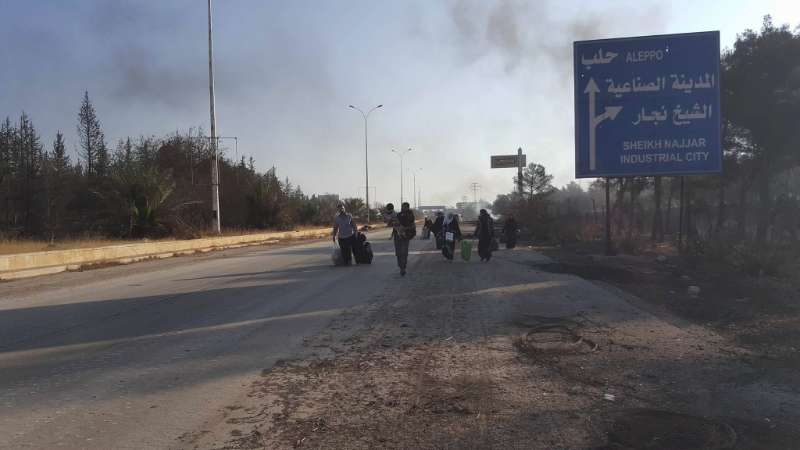 Not at the former northern supply road to Aleppo, the “Castello highway” and not near the Ramouseh district, the area where rebels pierced the siege of the eastern districts in August 2016. Instead, they attacked the south western corner of the regime-held part of the city itself – the militarily most difficult area of entire Aleppo. On the first day, they took the “al-Assad” suburb, which was renamed by Syrian activists to the “al-Rebellion” suburb after its capture. On the second day, rebels took the entire Minyan district and reached the “New Aleppo” quarter – the beginning of the heartland of pro-regime forces.

Against them stood various pro-Assad forces, among them numerous Iranian-led militias from Iraq as well as pro-Assad militias and remnants of the “Syrian Arab Army”, over-strained and extremely decreased in its numbers and capabilities after 5 years of war. What is interesting to see is that Assad’s strongest ally, Russia and its air force, did not intervene in the battle so far. It is not clear if the weather or a political decision is behind this phenomenon.

The first two days of the battle seemingly went as planned for the rebel coalition. Their advances were made rather swiftly and they killed and captured up to a hundred enemy forces, many from Iraq, – also by at least seven car bombs, 2 of them remotely controlled and 5 man-driven. But can rebels really break the siege of Aleppo and at the same time take large parts of western Aleppo on their way to the besieged eastern districts?
__new_in_first_article1__

The Islamist/moderate rebel force seems better equipped than ever before and armed by an unprecedented amount of weapons that they did not capture in Syria (hundreds of Grad missiles and artillery rounds of different calibers, launching systems, body armor and tens of thousands of bullets for their smaller arms). This indicates that several regional powers are supporting the operation to break the siege of Aleppo and furthermore, deal a deadly blow to the Assad regime and its backers. After months of stalled diplomatic initiatives by the West and the United Nations, which in the end moved Assad in a better and better positions, those countries seem to have lost their belief in a negotiated solution that would not bring out Assad as the winner of the war. So they decided to act, even though this meant arming groups that are designated terror organizations in the European Union and the United States. The failure of all diplomatic initiatives and the rejection to impose further sanctions on Russia, Iran and Assad seemingly left them no other option in their assessment.

Still, beyond the armament of the rebel groups, manpower remains a large obstacle. Assad and his allies presumably have 5 to 10 times as many fighters in and around Aleppo. However, their will to fight is rather small as they do not come from the area and many are not even Syrian citizens. Still, it remains doubtful if rebels can uphold their offensive for weeks or months if the enemy is able to rotate troops at the front while rebels have to keep pushing with always the same, daily pounded, personnel. Also – as it happened in early September when the regime and its allies recaptured the Ramouseh corridor, an anew intervention of the Russian air force, soon reinforced by the approaching aircraft carrier strike group, could turn the tide for opposition forces. Their aim must be to reach urban areas as soon as possible as this would make them and their vehicles much more difficult targets by the Russian jets.

Last but not least, political decisions outside Syria could have a decisive impact on the current offensive. The political decision to support and arm those rebel groups involved and give them a “Go” enabled the “battle for Aleppo” to begin and it is the same policy makers in the background that could come to another solution for Aleppo and thus stop the offensive by withdrawing men or arms support. It is therefore a whole set of factors that will decide if the operation to not just break the siege but also capture all of Aleppo from Assad and his allies will succeed or not. For now, rebels are on the road to victory in Aleppo but this road could be cut as unexpectedly as it was built.
-------------------------------------------
Julian Röpcke is a newspaper editor and political commentator, based in the German capital, Berlin. With a degree in Political Geography and Sociology, Mr. Röpcke started analyzing geopolitical conflicts after the US-led invasion of Iraq in 2003. He covered the “Arab Spring” as well as the evolving conflicts in Syria and Ukraine from their very beginning. Julian Röpcke works for BILD, the largest newspaper and leading online news portal in Germany (@JulianRoepcke).