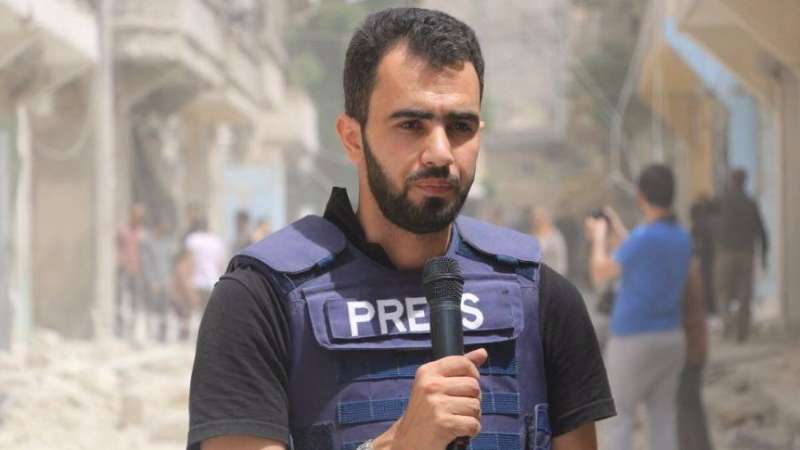 Orient Net
The non-governmental, non-profit organization, Reporters Without Borders (RSF) has listed the name of the Syrian journalist and media activist Hadi Abdullah among the nominees for Press Freedom Prize for the year 2016 in the category of journalists.
The Prize for Press Freedom will be awarded to three laureates – a journalist, a media outlet and a citizen journalist – at a ceremony in the Frecnch city of Strasbourg on 8 November.
Hadi Abdullah’s name came as the only Syrian nominee to win the prize of TV5 Monde in addition to nine other journalists who risk their lives to report news.
Among the Arab nominees for the prize are the Egyptian investigative reporter Ismail Alexandrani, for journalists category, the Libyan website Bawabat Al Wasat, and the Algerian web radio Radio M for the category of independent media outlets.
Reporters Without Borders was founded in 1985 in Montpellier, France. Its head office is in Paris, and has consultant status at the United Nations. At first, the organization worked to promote alternative journalism, but later the its direction was changed towards promoting freedom of the press.
__new_in_first_article1__
This is the 25th year running that RSF has awarded this TV5 Monde Press Freedom Prize .
It is worthy to note that Hadi Abdullah has recently survived an assassination attempt after an explosion targeted his home in one of eastern Aleppo’s neighborhoods. The attack took the life of his colleague the photojournalist Khaled Issa, who used to accompany Hadi while covering the Russian bombardment on Aleppo.
(Hadi Abdullah and Kahled Issa were injured by Assad and Russian airstrikes on Aleppo’s Jisr al-Hajj neighborhood, prior to the assassination attempt which took the life of Khaled Issa)
Hadi’s name emerged among professional journalists, and he became one of the credible sources of information in Syria, as he covered news stories in the most dangerous areas in Syria, which most journalist dare not enter.
Hadi Abdullah, 29 years, is originally from al-Qusair in Homs countryside. He started working in journalism as the Syrian revolution started. He gave up his higher education in nursing and dedicated himself to preparing independent news reports on Syrians and their revolution.
قيم هذا المقال 9 0