What went strategically wrong with the Syrian revolution?

What went strategically wrong with the Syrian revolution? 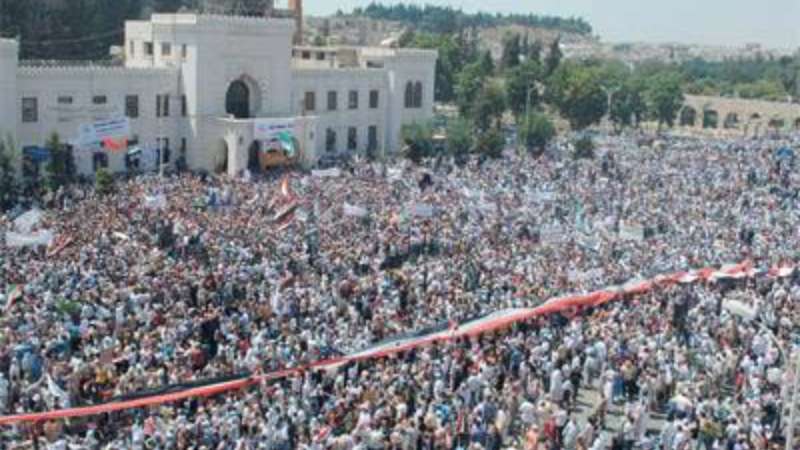 What attests to the fact that it is a revolution and a necessity and there are so many right things in and to it is the fact that Syrians are asking such questions. The attempted answers to the above first question are threefold: internal, regional, and international.

Internally, the Syrian popular uprising is destined to happen. Syrians who sought peace, tranquility and normal survival had a regime established on confrontation. Such a collision between Syrians and such a regime could have taken place any time before 2011 or after. The regime was programmed on crushing anything or anybody who says NO. The first wrong attitude or action by Syrians who revolted was their misperception of such a fact. Few expected the regime to respond in such brutality. It used chemical weapons to crush them. Second, many – in particular old opposition bodies – thought the regime would collapse in a matter of days. Those bodies’ main concern was assuming power because of chronic thrust for it. Third was coloring every move made or step taken by those who revolted against the regime by a religions flavor. The regime itself encouraged and utilized such an attitude; and it succeeded tremendously. It got the required pretext and even justification to perpetrate unprecedented crimes with the implicit and sometime explicit blessings of several parties. Fourth, those who rose didn’t realize how fragmented the Syrian society is. The regime’s color-up of such a society was that it is a mosaic society, when in reality it was working hard on fragmenting it along sectarian, religious, social, ethnic and even educational lines. And it succeeded. Fifth, though the regime projected that it was taken by surprise towards what was happening, it worked very hard on absorbing the shock and started first expanding the gray social area and solidifying the loyal strata. Then it moved to attracting the gray strata to the extent of recruiting it or at least treating it as loyal.  Many have moved from the phase of enthusiasm towards the uprising down to the gray area, then to neutrality and down to undermining and even opposing the uprising. An important huge sector of Syrian society was neutralized because of fear, interests, selfishness and opportunism. Sixth, many of those who assumed opposition status turned out to be a plague for the uprising. They were detached from people; they were fragmented; the most powerful among them had Islamic religious affiliations; and many were tempted by the money pouring into the revolution. Seventh, that extremist religious dimension organized in groups and affiliated themselves with the infamous al-Qaeda, the most extreme terrorist organization recognized all over the world. That must have relieved the regime and those allied with it a great deal. Eighth and most devastating was the Syrian exodus to which the brutal Assad regime was the basic contributor. Almost half of the Syrian population was uprooted or displaced; and half of those made their way outside Syria and turned into an excuse and pretext for the regime to even do the ethnic cleansing the world is observing almost every day in several Syrian cities or towns.
__new_in_first_article1__

Regionally, Syrians were plagued by Arab states who thought – like Syrians – that it would be a matter of days; and the regime would evaporate. They did what they did without a plan or a strategy. This applies to most of the countries which consider themselves to be "friends of the Syrian people." The conflict between and among such states along religious and political lines − with each country supporting a particular group − prevented a quick finish of the regime. Iran’s expansionist policy was not taken seriously early on. It lately proved to be an occupying force with the upper hand in whatever goes on in Syria. Turkey also was between the internal and Kurdish rock and the outside hard places fluctuating between interfering and posting excuses of American and other pressures. Israel’s attitude was not only among the wrong things that happened to Syrians, but a horrible planned strategy that tuned up with the Assad regime strategy of "ruling Syria or ruining it." It realized that an equal to the regime in terms of serving Israel’s interests is scarce to find; so it went with the option of seeing Syria ruined.

Internationally, the American and Russian contributions to the Syrian tragedy require volumes to be accounted for. They were at least expected or assumed to be balancing each other confrontationally. They were, as a matter of fact, complementing each other to the extent of coordination to ruin Syria. Taking their sides by Syrians – on both sides of the conflict – resulted in lengthening and complicating problems and led to more devastation and blood-shed. Putin appeared to be making use of the American looseness and exercised all sorts of bloody bullying. Moreover, the apparent siding of the Americans by Syrian people against the regime was probably more harmful than neutrality or even siding by Assad explicitly rather than implicitly. Syrians have missed this point. The Assad regime has been historically benefiting from presenting itself as an enemy to the U.S. and down deep it is a very important agent serving the U.S. goals and plans in the region.

All in all, the above factors need to be re-investigated and lessons from them must be learned so that a new start could be launched. Syrians cannot afford continuing with the same mistakes as their very existence is at stake.