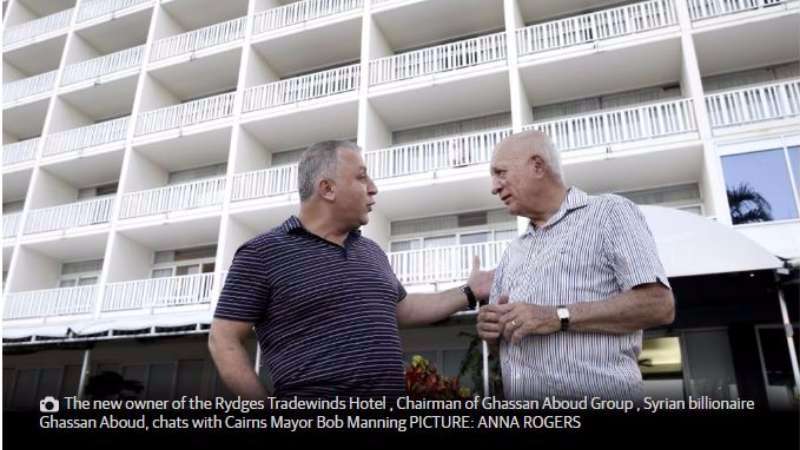 Australia’s Cairns Mayor Bob Manning has received Syrian businessman Ghassan Aboud whose Group launched a number of investments in the north of the country, at the forefront of which is Rydges Tradewinds Hotel.

The meeting was followed by a press conference attended by a number of media outlets which covered the visit in the context of following up the new investments in Cairns, a city considered to be an attractive touristic destination in the north of Australia.

Ghassan Aboud Group’s new commercial investments in Australia come within a set plan to enter the tourism sector, as the Group announced one year ago when it opened its new headquarters in Jebel Ali in the United Arab Emirates where Ghassan Aboud, the owner of the Group, unveiled a plan of the expansion in medical and tourist sectors in Africa, South America and Asia.

Here in below the full text of the report published in The Cairns Post by Jim Campbell:

CAIRNS leaders have rolled out the welcome mat for a billionaire Syrian developer whose plans for the city herald a “new era” in tourism development.

His company, GA Group Australia, also snapped up the adjacent property, which for many years housed the iconic “Kamsler House” on the Esplanade, for an undisclosed amount, thought to be between $3 million and $4 million.

The group will merge the two blocks to accommodate a major redevelopment of the Tradewinds hotel, upgrading the resort to boast more than 300 five-star rooms.

And Mr Ghassan’s latest acquisition – the 4000sq m, vacant block at the corner of Aplin and Lake streets – is another bold foray into the region’s tourism industry.

The Cairns Post can exclusively reveal the group plans to build a 200-room hotel at the site with preliminary designs already under way and the purchase contract expected to settle in coming days.

Mr Aboud said it was the weather, the rainforest and the Reef that attracted him to Cairns and he predicted the city was on the crest of a development wave.

“I think in five to seven years, you will see a whole new Cairns,” he said.

Cr Manning agreed, saying the city was the “shining light” destination in Australia, with consistently high visitor numbers. And he said the timing of Mr Aboud’s entry to the market was “impeccable”.

“We’re in a position now where we’re short of room stock, so there are certainly opportunities,” he said.

__new_in_first_article2__
“This is the first example of someone who has come along and moved very fast.”

Mr Aboud indicated his group was investigating a third property purchase but said it was in the very early stages.

“Astute businesses make a habit of being in the right place at the right time,” Mr de Waal said.

• Ghassan Aboud was born in Syria, is married, and has five children

• He has been an outspoken critic of the Assad regime in Syria, as well as ISIS, and has given extensive support to humanitarian aid including building 13 hospitals and two schools through his charity, Orient Organization