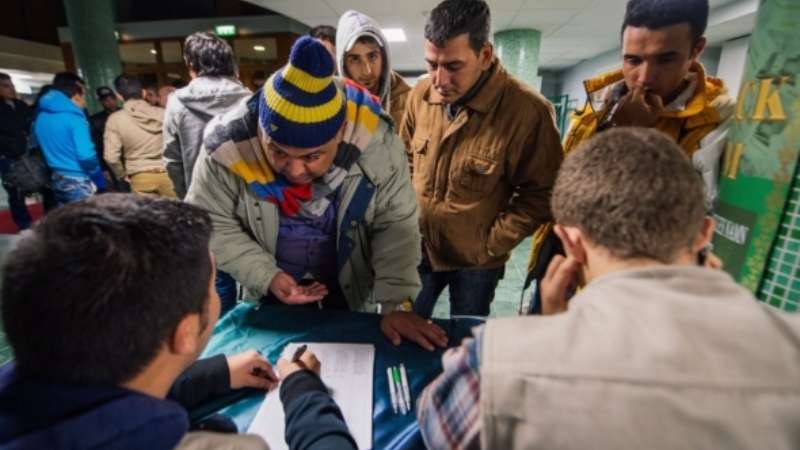 Refugees struggle with mental health problems caused by war
__new_Underarticle_image_EN__
Orient Net - Scientific American
On an ice-cold day in January, clinical psychologist Emily Holmes picked up a stack of empty diaries and went down to Stockholm’s central train station in search of refugees. She didn’t have to look hard. Crowds of lost-looking young people were milling around the concourse, in clothes too flimsy for the freezing air. “It struck me hard to see how thin some of the young men were,” she says.
Holmes, who works at Stockholm’s Karolinska Institute, was seeking help with her research—a pilot project on post-traumatic stress disorder (PTSD), which is all too common in refugees. She wanted to see whether they would be willing to spend a week noting down any flashbacks—fragmented memories of a trauma that rush unbidden into the mind and torment those with PTSD. She easily found volunteers. And when they returned the diaries, Holmes was shocked to see that they reported an average of two a day—many more than the PTSD sufferers she routinely dealt with. “My heart went out to them,” she says. “They managed to travel thousands of kilometres to find their way to safety with this level of symptoms.”
What hasn’t been widely discussed is the enormous burden of mental-health disorders in migrants and refugees. Clinical psychologist Thomas Elbert from the University of Konstanz in Germany is conducting a local survey of refugees that suggests “more than half of those who arrived in Germany in the last few years show signs of mental disorder, and a quarter of them have a PTSD, anxiety or depression that won’t get better without help”. Previous research shows that refugees and migrants are also at a slightly increased risk of developing schizophrenia.
“It is a public-health tragedy—and it’s a scandal that it is not recognized as such, as a physical epidemic would be,” says epidemiologist James Kirkbride of University College London.
Doctors and researchers are starting to take action. Holmes and other psychologists and psychiatrists are working with refugees to develop practical, cheap and effective therapies for trauma-related disorders—therapies that could be quickly deployed on this group. Other scientists want to work with local refugees to understand more about how the different types of stresses they suffer play out in their brains, and to learn more about the basic biology of psychiatric disorders.
Scientists hope that their studies will help them to deal with other displaced populations, and help policymakers to accommodate the current influx. Politicians have been too slow to consider mental health when they call for refugees to integrate quickly, Elbert says. “It is illusory to think that people can learn a new language and find work when they can’t function properly mentally. If we want quick integration, we need an immediate plan for mental health.”
Making a new life
__new_in_first_article1__
Amira is a clinical psychologist and a refugee from Syria. When the war there started, she worked in camps for Syrian refugees in Jordan. She saw people who had been physically attacked, women who had been raped and children who had been neglected. The symptoms of PTSD were clear, and she knows that many refugees have depression and anxiety, too. She asked that her real name not be used.
She arrived in Sweden at the end of December 2015, and wanted to help other refugees but was not allowed to work at first. She tried to make contacts in Stockholm and joined a language course for refugees; she felt very alone but carried on. Now, she has a 6-month position. “I met many children who have experienced war,” she says. “We feel sad, [about] how our children think and how they feel. I have a child and I try to protect him.”
The stress of upheaval
Psychologists recognize three windows of extreme stress for refugees: the often violent traumas in their home countries that led to their flight; the journey itself; and the arrival, when people are thrust into a foreign country. “The latter ‘post-migration’ phase is becoming increasingly important,” says psychiatrist Malek Bajbouj from the Charité university hospital in Berlin. “Suddenly they realize they have lost everything, have no control over aspects of their lives and no social standing.”
In February, Bajbouj—who is of Syrian descent and speaks Arabic—opened a clearing centre for refugees with mental-health problems, the first of its kind in Germany. It’s a quiet building, a former hospital in the centre of Berlin—but already 1,500 troubled people have passed through its doors. “Refugees may arrive in Germany with great hope, but then find themselves stuck for months in camps with no apparent prospects,” he says. “When we ask them what their greatest stressors are, they typically refer not to their traumatic memories, but to their current frustrations.”
The biggest challenge for Bajbouj and others is the sheer volume of people in need of help. They must be assisted quickly and cheaply, in ways that take the pressure off overstretched health professionals. At the clearing centre, three psychiatrists assess visitors rapidly, categorizing them into those who require low-level or more-intensive psychiatric help and those who can be aided by social workers. A lot of effort goes into teaching about stress management and the science behind mental health. “Some people from rural areas hold the Djinn responsible for their moods,” says Bajbouj, “and we teach them that symptoms like sleeplessness and depression are biologically based and can be treated.”
Elbert wants to see similar triage systems put in place across Germany. In a paper to be published next month, he and a group of colleagues call for a three-tiered approach. Refugees would initially be helped by bilingual laypeople—ideally migrants or refugees themselves—who are trained to guide people through the German health system (tier one) or to offer trauma counselling (tier two). Those in most need would progress to tier three: qualified psychologists or psychiatrists.