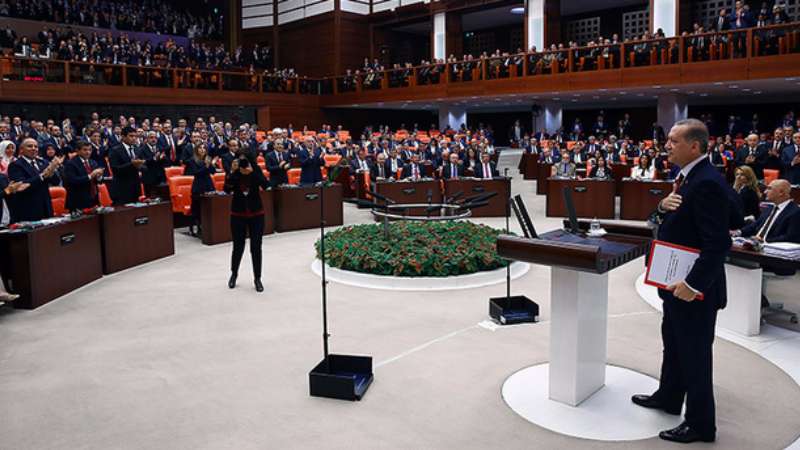 AA photo
Orient Net - Daily Sabah
The Parliament extended the mandate to send military troops abroad for 13 months during their first convention Saturday of the new legislative year after one and a half month long recess.
The bill passed easily on the first day of the new session of parliament with support from the ruling Justice and Development Party (AKP), main opposition Republican People’s Party (CHP) and Nationalist Movement Party (MHP). Only the Peoples’ Democratic Party (HDP) voted against.
The motion also allows foreign forces usage to Turkish airbases and Turkish territory against the same threats, including ISIS, the PKK and its Syrian affiliate, the Democratic Union Party (PYD) and its People’s Protection Units (YPG) militia.
Parliament Speaker Ismail Kahraman said that making a simple, civilian, democratic, libertarian and individual-centered new constitution is a top priority for this legislative year.
In his address, President Recep Tayyip Erdoğan said that he would support Parliament’s efforts for a new constitution and change its bylaws. He stated that he is willing to leave behind the "pointless" arguments with the opposition for the upcoming period, and urged the opposition to end the attacks on the presidency.
Both Kahraman and Erdogan thanked the members of the parliament for their honorable stance during the July 15 coup attempt, in which Gulenist Terror Group (FETO) linked officers went as far as bombing the complex while deputies were inside to show solidarity.
Speaking on the problems in Iraq and Syria, Erdogan said that ISIS is not the cause, but the result of ongoing problems in Iraq and Syria, an argument used by those who have plans there. "It is not reasonable for a country with a 22 million pre-war population could not be cleansed from ISIS’ foreign fighters estimated around 10,000 for over five years. The same goes for Iraq. It is obvious that problem does not stem from approximately 10,000 foreign fighters," Erdogan said.
Factions in the Free Syrian Army (FSA) launched in August the first phase of Operation Euphrates Shield aimed at liberating the city of Jarablus in Aleppo eastern countryside, supported by Turkish infantry troops and jet fighters.