Aleppo’s Sakhour hospital out of service, death toll mounts to 33 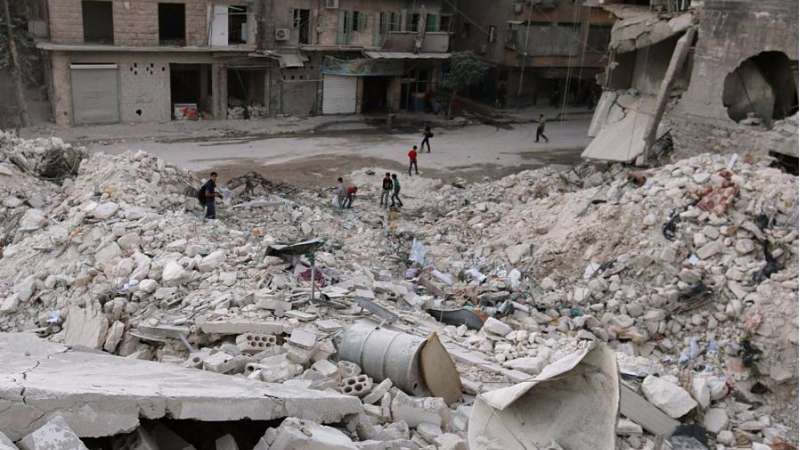 Orient Net
The largest hospital in Aleppo, al-Sakhour Hospital, was hit today by at least two Russian bunker buster bombs, Orient News correspondent said.
"A large explosion hit al-Sakhour Hospital killing two civilians of those who came to be treated. It is the largest hospital in the area. Now it has become out of service," one of the residents told Orient Net.
France condemned the bombing the hospital, saying the shelling of healthcare structures and personnel in the besieged city constituted war crimes.
"Their perpetrators will be held to account," Foreign Minister Jean-Marc Ayrault said in a statement today.
"France is mobilising at the Security Council as we speak to put a stop to this unacceptable tragedy," he added.
On Friday, Russian and Assad terrorists conducted 70 airstrikes on 17 Aleppo’s neighborhoods killing 31 civilians, including children and women, in a city seeing some of the worst of a renewed escalation of killings.
In the neighborhood of al-Sha’ar, Russian phosphorous bombs caused a state of horror and panic among civilians and civil defense volunteers who tried vainly to extinguish them.
__new_in_first_article1__ "Al-Hellok, al-Sakhoor, al-Haidariyya, Ba’adeen and al-Sha’ar were among the most targeted neighborhoods in the devastated city," Orient News correspondent said.
"The civil defense volunteers are still trying to pull out bodies from beneath the rubble," one of the locals in al-Sha’ar neighborhood said pointing out that this may rise in the death toll.
News agencies and freelance reporters in the eastern enclave of Aleppo confirmed that the the bunker buster bombs used by Russians were causing tremors and cracks in civilian buildings.
Meanwhile, Doctors Without Borders (MSF) called on Friday for an immediate end to the ’Syrian’ regime’s heavy bombardment in Aleppo, which has killed at least 500 people in the past two weeks.
MSF demanded that the Assad and allied terrorists stop the bombing that was causing a bloodbath among civilians, the humanitarian organization said in a press release on Friday.
MSF’s director of operations Xisco Villalonga warned about a deepening humanitarian crisis in the city, where nearly 275,000 civilians find themselves under siege.
The Assad regime ended on Sept. 19 a weeklong ceasefire to begin a major offensive in Aleppo, despite heavy criticism by the international community.
قيم هذا المقال 29 0