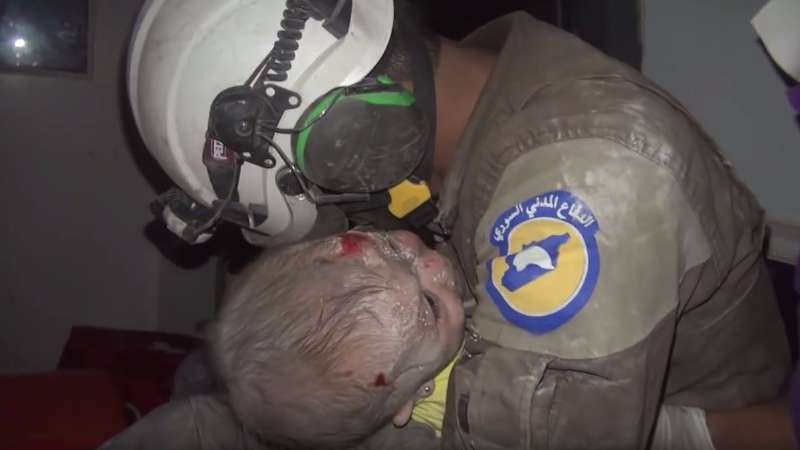 A civil defense volunteer holding a newly rescued baby girl to his chest.

Assad and Russian jet fighters carried out on Thursday new bombardment rounds on Idlib, leaving 11 civilians dead and more than 15 others injured.
Syria’s White Helmets or civil defense volunteers rushed to the scene to recover bodies and rescue the injured, transporting them to medical points.
Abu Kifah, one of the civil defense volunteers, was among others searching the rubble for any survivors.
After two hours’ work, Abu Kifah and his colleagues were able rescue a 30-day-old baby from under the rubble.
After recovering the baby girl, Abu Kifah burst into tears and held her tight to his chest while he got on an ambulance and took her to one of the makeshift hospitals in Idlib, as a video footage, published by one of the activists, showed.
In the footage, Abu Kifah is seen holding the baby girl to his chest and getting on an ambulance.
Abu Kifah did not let go of the girl and was weeping and saying “O, Allah,” as paramedics were cleaning some bruises which were on the baby’s face.
__new_in_first_article1__
Moaz al-Shami, a citizen journalist, met Abu Kifah to ask him about rescuing the baby girl.

“We worked about an hour, or an hour and a half to reach the baby girl, whose age is no more than 30 days old,” Abu Kifah said.
Abu Kifah also said that he is proud of himself and his colleagues as they saved the life of the baby girl, which might have been killed.
“With the help of God, we were able to recover the baby girl. Thank God, the baby girl did not have any single injury,” Abu Kifah added.
“When I held her, I thought of her as my own baby girl … I … took her to the hospital while I was holding her close to my chest as if she were my own daughter.
When I held her close to my chest, I was deeply touched,” said Abu Kifah.
قيم هذا المقال 18 0