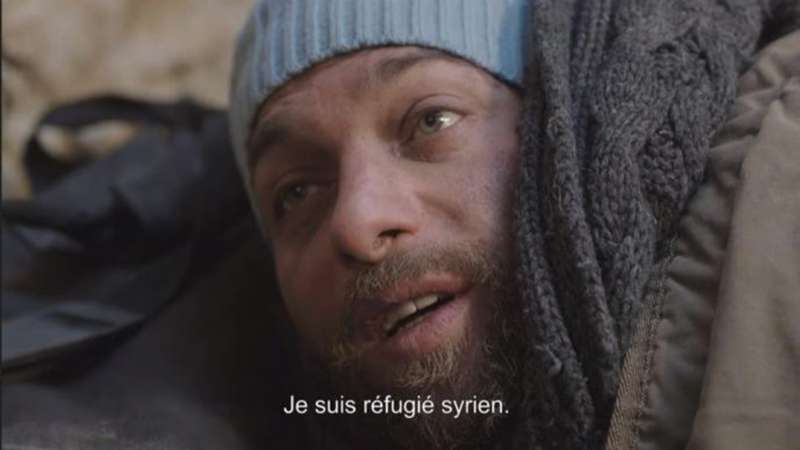 Majeed played the lead role in the film about refugees in Europe
__new_Underarticle_image_EN__
Orient Net - Yasser Ashkar
Syrian actor Wasim Majeed recently played the starring role in the French film “Soury” (translated “The Syrian”) which recounts in the language of high end cinema just one of the stories of the suffering of thousands of Syrian refugees who have made the perilous trip into Europe since the current refugee crisis began.

In less than 25 minutes, “The Syrian” tells the story of a Syrian refugee who left his war-torn country and becomes lost in the French countryside of Provence after being cheated by a trafficker he had paid to take him to the historic city of Avignon.

While trying to get his bearings in the valley of Vaucluse, he meets an old French farmer named Bob who miraculously happens to speak Arabic.

After initially wanting nothing to do with the Syrian refugee, the old French farmer overcomes his aversion and the two men begin trying to build a bridge of friendship between their two vastly different cultures.

The film’s story brings to life some of the most prominent ideas about migration, refugees and the rising racism among Europeans in the face of the flood of asylum seekers that has swept across the continent in the past few years.

From the perspective of Syrian refugees, the film manages to communicate their desperate desire to find a safe place anywhere in this world where they can live with even a minimum of human dignity and safety from a brutal government intent on killing them and their families.

__new_in_first_article1__
Majeed, who has been living in Paris but does not speak French, wrote the Arabic script for the film and told Orient Net that being able to participate in an Arabic language film that was nevertheless 100% French was an amazing experience – but also a major linguistic challenge, not only for him, but for everyone involved.

His co-star, French actor Yves Morard, who plays Bob, is an amateur actor and wine producer who worked for 25 years in the Bekaa Valley in Lebanon producing several varieties of fine wines.

While working in Lebanon, Morard learned enough Arabic to be able to conduct his business, staying even during the war years and continuing to produce wine under fire.

Morard returned to France to invest in his father’s land in 2001 and agreed to participate in the film because it provided him with another opportunity to work as a professional actor, a calling he truly loves.

“Acting is a human trait and there is no creature on earth who cannot act,” he told Faris Rifai of Zaman Al Wasl.

Despite the years spent in Lebanon, Morard’s Arabic is limited while the film’s French director, Christophe Switzer, knows only a few English phrases and no Arabic at all.

__new_in_first_article2__
Majeed said that although there were many difficult moments, ultimately the film’s crew found ways to overcome the obstacles because as dedicated professionals, cinema itself was the language which united them.

Majeed also shared with Orient Net that the real hero in making the film was Syrian French video editor Alaa al Homsi who was “the key that unlocked the language barrier” between himself and the film’s French director.

“Alaa was the real bridge that enabled us to complete this work,” said Majeed. “He bridged the gap between the Syrian story and the French vision – between the director Christophe Switzer and the Tip Top Production Company.”

“The film also brings to light the problems of refugees who find themselves searching for those who speak Arabic among the residents of Europe,” he added.

The aspiring young actor, who is also hoping to find a place to settle down and call home, appreciated the opportunity the film provided for getting to know the city of Avignon which is considered to be the symbol of theater in Europe.

Majeed says that working on the film also helped him to learn more about the roots of French culture and acquire a better understanding of Europeans and their fears and concerns about the refugee issue.

The English subtitled trailer for the film can be viewed here: https://vimeo.com/182422607