A dream comes true for a refugee mother from Daraa

A dream comes true for a refugee mother from Daraa 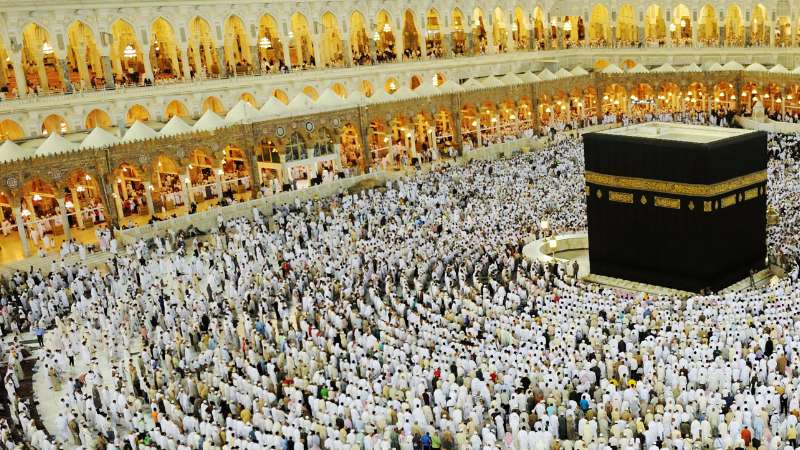 A dream comes true for a refugee mother from Daraa
__new_Underarticle_image_EN__
Orient Net - Yasser Ashkar
Even though performing the Hajj pilgrimage to Mecca is an important pillar of the Islamic faith, it was only a pipedream for the majority of Syria’s Muslim refugees whose limited financial resources preclude many from considering any expenditure that goes beyond the basics of daily survival.

Even before the revolution began, many members of Syria’s majority Sunni population were too poor to be able to afford the trip which must be booked through travel agencies authorized by the Saudi Arabian government in order for all the legal requirements to be properly met.

For Ghazia Jaber, a 60 year-old widow who has been living in the Zaatari refugee camp since escaping from the regime’s bombs that were falling on her home city of Daraa in 2013, being able to attend the annual Hajj pilgrimage was not even a consideration.

So when four of Jaber’s sons told her that they had arranged for her to leave the difficult life of Zaatari for a week, in order to attend this year’s Hajj in Mecca, the mother of eight was overwhelmed with joy.

"When they told me, I couldn’t contain my joy," she said shortly before her departure for Saudi Arabia. "It was the happiest day of my life."

Jaber’s  youngest son Ahmed Albaker told Lora Moftah of Syria Deeply that he and his brothers had first come up with the idea of arranging for their mother’s pilgrimage  two years ago when she experienced a stroke shortly after the family escaped from Syria.

"She worked hard to raise us and I was afraid she’d die before she was able to fulfill this pillar of Islam she’s been praying her entire life to be able to do," Albaker told Moftah.

The four brothers pooled their savings and submitted the necessary paperwork and told their mother nothing about their plans until all the arrangements had been successfully made.

Jaber and Albaker were among a handful of Syrian refugees living in Zaatari who made the pilgrimage this year.

__new_in_first_article1__
Albaker told Moftah that he took with him a list of all the people he needed to pray for during his pilgrimage.

"Before the crisis, I would have just prayed for my family," he said. "But now, I can’t only pray for them, but for all of the Syrian people and for refugees everywhere. There are so many people I need to pray for."

A representative from the Jordanian Ministry of Islamic Affairs said the agency estimates that around 2,000 Syrian refugees from across the country made the holy pilgrimage this year.

Among them were 60 Syrian refugees living in Zaatari who registered to go on this year’s Hajj according to the Jordanian agency tasked with overseeing the camp and facilitating the Hajj process for its residents.

According to Amnesty International statistics, more than 80% of Syrian refugees currently in Jordan live below poverty level.

But years of living in Zaatari — which has evolved into one of the largest cities in Jordan — has provided some entrepreneurial refugees with opportunities that have helped to improve their financial situations.

Some camp residents were assisted with remittances from family members in Europe and others found ways to build small businesses of their own to support themselves and their families.

Currently, approximately 2,500 shops operate inside the camp and contribute to the steady growth of its economy.

Moftah observed that “one of the camp’s busiest streets, nicknamed the "Champs Elysees" by aid workers, is lined with everything from bakeries and shawarma stands to bridal shops and beauty parlors.”

__new_in_first_article2__
The income generated by these shops has allowed some refugee families to finally be able to afford the Hajj.

But even with greater employment opportunities, most of the camp’s residents continue to be dependent on food vouchers and other supplies provided by the United Nations.

Consequently most of the 80,000 residents living in the three square mile camp are not able to afford the $ 2,000 minimum price tag quoted to refugee families  as the cost of going on the Hajj trip.

Jaber and her family are among those who have been fortunate enough to start their own small family run business inside Zaatari.

Together they run a small grocery kiosk located on one of the camp’s dusty roads.

A small refrigerator unit sits in a corner holding a limited variety of carbonated sodas and fruit juices, while non-perishable items such as biscuits and candy are arranged on the kiosk’s few shelves.

Albaker, an Islamic scholar in Syria, splits his time between preaching at a nearby mosque and running the family’s small grocery business.

Albaker told Moftah that three years of living at the camp has provided a sense of stability that contributed to his decision to fulfill the religious obligation this year —  despite the fact that  his family’s financial resources are extremely limited.

"For me, Hajj is priceless, it can’t be valued," he told Moftah.

"You feel something is calling you there. It’s emotional. If God takes my life after I come from Hajj, then fine. I’ll have accomplished what I needed."