Has the Syrian armed opposition been politically besieged? 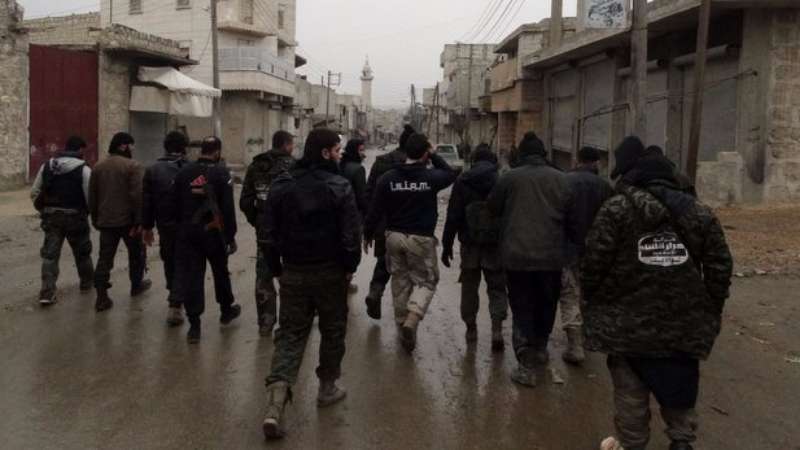 Ali Safar
Till Monday evening the majority of the armed opposition has not announced an official stance towards the Russian-US agreement. Such a stance remained the mass media preoccupation trying to snatch stances from some factions’ spokesmen. However, nothing official was announced apart from what Abu Ammar Al-Omar, Ahrar Al-Sham general leader deputy, announced rejecting the agreement. Some even negated any approval leaving the issue to negotiations among the factions which resulted in common reservations some of which were announced in Ahrar Al-Sham statement.

Awaiting the armed groups stance was not only the obsession of mass media outlets, but also that of the US and Russia whose military and field strategy will be built on it. The desire of knowing the choices of those who carry weapons was what overwhelmed the thinking of Syrians whose future will be determined based on the dues of the truce announcement and its carrying out procedures.

Resumption of bombing after announcing the agreement and perpetrating a heinous massacre in Idlib city when the Russian jets targeted its popular market and violated the truce in many areas after it went into effect did not make Syrians feel it is different from those initiatives they saw in the truce announcement in the beginning of the year. Rather, all felt doubt towards what is happening in Geneva considering it a new link of conspiracy on the Syrian revolution, especially that the general frame of the agreement was based on announcing a truce at any cost without any reference to the nature of the political track Russia and the US intend to follow. Even the fate of Assad and his junta was not mentioned at all. What added insult to injury is the odd mixture of duties laid on the armed groups which got worse by announcing a second letter sent by Michael Ratney to the armed groups which included direct threats that they will be targeted if they do not stay away from Fatth Al-Sham Front and if they deal with it.

Within a context enveloped in mystery, incentives provided by the US and Russia to the groups did not exceed their escape from being classified as terrorists; there is no clear political horizon that makes the fighters see a clear equation between holding their weapons and a clear political process that will remove Assad, the one who is the reason behind all what is happening on the ground.

For these reasons, among others, the groups’ response was late and will be late more considering that there will be no one clear stance to gather them all. The groups are not framed in one political frame and their stance will no doubt be built on a rapprochement to be carried out with the countries in the region which support them and which will wait for a clarification of the strategy that made the US accept an agreement seen by everyone as a victory to the Russians who could put aside all the insisting issues and delay them till the next stage; all issues were linked to the implementation of the agreement.

The Russians also succeeded in exercising all kinds of pressure on the armed groups without any reference to the duties of the second party which is blindly referred to as the party represented by the ‘Syrian government’ although everyone knows that the regime’s army was not the active army on the ground in all battles that took place recently. Its weakness prevents it from fighting the hard battles that occurred in the colleges and al-Ramoseh south of Aleppo and shows that the active powers were the sectarian militias that came from Lebanon, Iraq, Iran and Afghanistan.

If the groups approve the agreement, it will mean accepting the fighting areas as are, allowing the regime and its allies to control the humanitarian situation in Aleppo city. This will mean the inability to alter anything on the ground as long as what is wanted is maintaining the ceasefire; the approval will also mean the acknowledgement that Fatth Al-Sham Front will be a target of bombing without offering it any help. This will result in a loss of Jaysh al-Fatth which constituted a main lever for the progress of the groups while confronting the regime and its militias’ attempts to re-control the areas lost by force.

All active powers certainly realize that allowing the international coalition forces and the Russian jets that constitute the main pillar of the regime forces on the ground to destroy them (the active powers) will mean the possibility of repeating the same scenario with the other groups which will find themselves in a critical situation. Rejection will eventually lead to an open acknowledgement of the Russian foreign ministry viewpoint when it used to reject talking about moderate groups and to promote the regime’s propaganda that anyone who holds weapons against it is a terrorist. Acceptance, however, will also lead it to more fragmentation waiting for the groups to be taken to the holocaust.

Are all ways out of the political siege represented by the US-Russian partnership against the armed groups blocked? The answer can be ‘NO’ so far as the political opposition’s stance is not clear despite some positive signals that came from some coalition members. The High Negotiating Commission announced that it did not receive a written copy of the agreement. Its spokesman, Saleh al-Muslet, said in a statement to AFP that the HNC wants to know the warranties and the application mechanism in addition to the way of classifying terrorism and what response will be in case violations occurred.

It is possible to build on the HNC’s stance towards the new developments after negotiating with the armed groups and with the regional powers which seem to be unhappy with the dominance of the Russian vision over the agreement and its details. It is also possible to bet on the revision of the groups to the current situation that will enable them to take decisions that can maintain their military power and will not expose them to fall in the trap. Here it is inevitable to review some readings circulated on social media and which asked Fatth Al-Sham Front to dissolve itself and merge with the other groups. Before all this we can go back quickly to the resumption of the negotiations of the last period which aimed at merging all groups in one body that operates under the flag and basic slogans of the revolution.

Possibly the most prominent way out that should not be ignored by the armed groups is going back to read the conditions that accompanied their foundation and which gave them legitimacy among the revolution population. The armed revolution started under the slogan of protecting demonstrators and defending civilians while confronting the military security solution the regime started since the first days of the revolution. The revolutionists’ cooperation and synergy among each other formed a legitimate frame that protected whoever held weapons. However, swaying away from the goals of the revolution and following certain practices that are far from the national vision of the revolution in addition to following the will of those regional and international powers interfering in the Syrian issue shock the original form for which armed action was created against the regime.

Reviewing all the above will inevitably lead to clarifying which way the armed revolutionary groups should follow and eventually their decision will exceed their responsibility on the ground under their control to include the destiny of this stage of the history of the revolution.