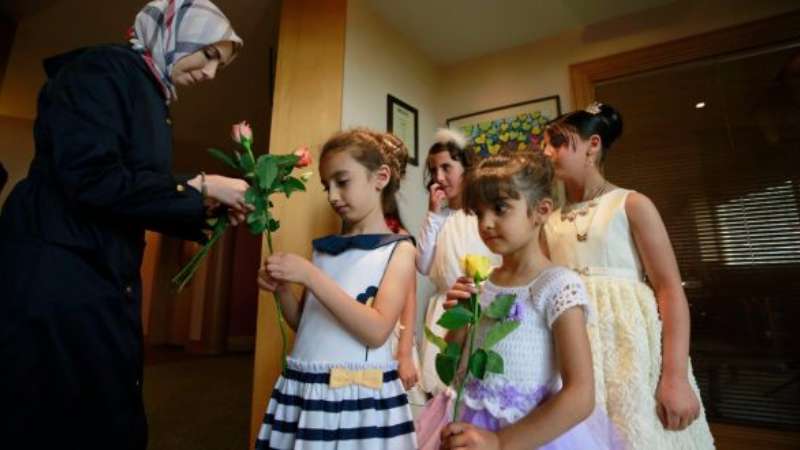 Syrian Muslims spend Eid thinking of loved ones still under attack
__new_Underarticle_image_EN__
Orient Net - The Irish Times
Syrian Muslims living in Co Laois, Ireland, spent Eid al-Adha remembering their loved ones still under attack in their homeland.
This year, 55 Syrian adults and children living in Portlaoise spent the celebration thinking of those who are “living in concentration camps” in Europe and others who are unable to leave Syria.
Eid al-Adha, known as the Feast of Sacrifice, is one of the holiest celebrations in the Muslim calendar.
The celebration commemorates Abraham’s willingness to sacrifice his son to God. The festival also marks the end of the Hajj pilgrimage to Mecca.
Charity worker Carmel McInerney, who has visited Syrian refugee camps in Greece and attended the event in the parish centre in Portlaoise, said: “These people are now in concentration camps, and I don’t mind calling them concentration camps. They are in the depths of hell. No human being should have to go through the things they have been through – it is inhumane.”
Radwan Abouhajar and his family are one of 14 Syrian refugee families that are now living in Portlaoise. They fled from northern Syria two years ago and had to leave Radwan’s parents behind. Radwan says it is his children who keeps him going.
“Our children are doing brilliantly in Laois,” says Radwan, “They speak English and go to school with Irish children. They are hopeful and that gives us hope.”
The children of the families in attendance indeed showed hope. Noor, aged 10½, said that she loved living in Co Laois.
__new_in_first_article1__
“I go to school now and my favourite subject is science. I want to be a science teacher when I’m older. The only thing I don’t really like is the weather.”
Farah (9) agreed with Noor about Irish weather, but said she has a lot of Irish friends now.
Fr Paddy Byrne was a guest at the event in the parish centre and said that helping to include the Syrian community in the area was essential to helping them rebuild their lives here.
“The Syrian people have suffered far beyond what most people can imagine,” he said.
Also present was the head of the Irish Syrian Committee, Kamal Abouhajar.
Kamal, who is originally from Syria, has been living in this country for the past 21 years and he said that, despite being two very different cultures, the Irish people had welcomed him and his family with open arms.
“It is very true that what they say, that the Irish are some of the most welcoming people in the world. It is certainly what we need, in this time of need.”
Syrian native Noureldin Abdelgawwad finished by asking those at the event to “spend this day in prayer. Pray for those who just want peace and who pay with their lives.
“Pray for everyone in the world who in need and who are suffering,” he said.