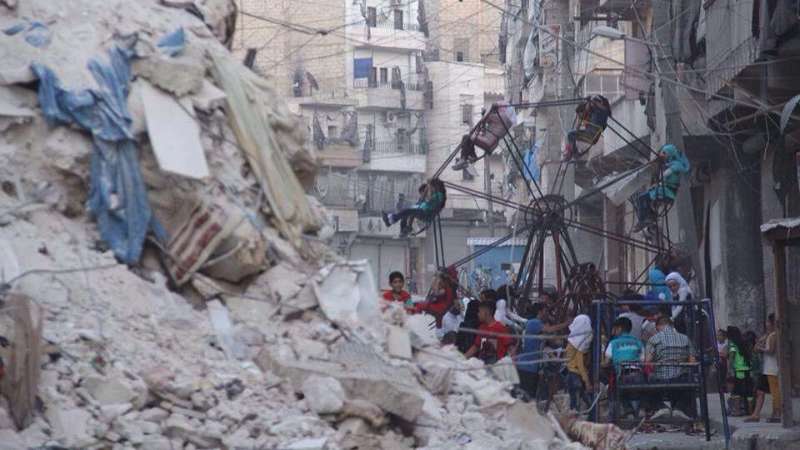 How do children celebrate Eid in Aleppo?
__new_Underarticle_image_EN__
Orient Net
For children in Syria, Eid al-Adha would usually mean new clothes and shoes, home cooked meals with family, and gifts.
But for the past few years for the children of Aleppo caught up in months of intense bombardments and massacres, Eid has turned into a more subdued celebration.
The clothes are simple, and the family dinner table is now half empty.
Amid the chaos, small pleasures are sacred, as illustrated in pictures from the Aleppo Siege Media Centre.
They show children in the run up to Eid al-Adha, the festival of sacrifice, which began in Syria on Monday morning.
The cruel irony is the human sacrifice many in the besieged city have had to make.
They play together in the street, an old bomb now used as a climbing apparatus.
The Aleppo Siege Media Centre is a collective of doctors and media professionals that document attacks in the city.
__new_in_first_article1__
The group was responsible for the footage of five year old Omran Daqneesh sitting in an ambulance following an airstrike in Eastern Aleppo which went viral in August.
Life from the ashes of war
Abdulkafi al-Hamdo a professor in Aleppo described seeing children as their pictures were being taken.
“I walked around and saw children in their new clothes playing together. It is fantastic to see life from the ashes of war,” al-Hamdo tells BBC.
“The children of Aleppo are still alive, they didn’t give up. It seems that they are the ones who give us hope to carry on.”
“They run, play and laugh. I like them so much because they are so patient and courageous.”
“When they hear there is a helicopter in the sky, instead of running away, they ask where while looking up at the sky.”
For months Aleppo has come under intense aerial bombardment by Assad regime “troops” backed by Russian forces.
The latest target was a market in rebel-held Idlib which killed up to 60 people and injured dozens of others as they shopped for Eid, while at least 45 died in strikes in Aleppo.