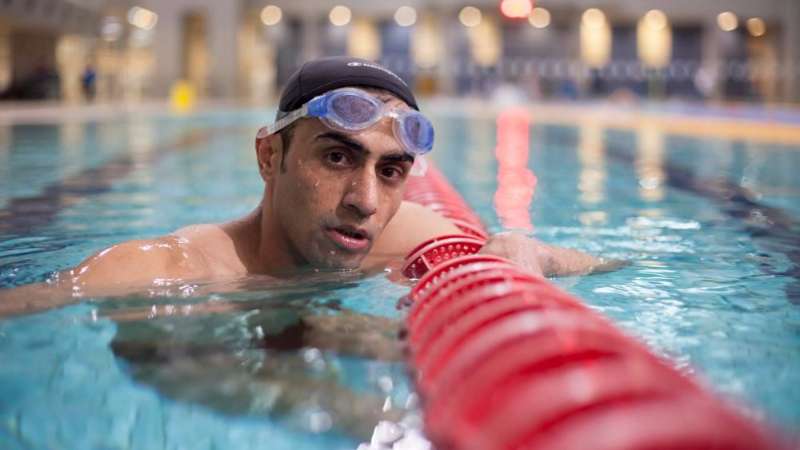 In many respects the story of 27-year-old Ibrahim al-Hussein is similar to that of many other Syrian refugees.

After a catastrophic injury in 2013 changed the course of his life forever, Ibrahim felt he had no other choice than to leave his country and make the risky journey to Europe via Greece in search of safety and the chance for a somewhat normal life.

Having lost a leg in Assad’s brutal war against the Syrian people that has resulted in hundreds of thousands of amputees, Ibrahim, whose father was a swimming coach in Syria, never imagined that he would be able to continue his dream of someday becoming an Olympic swimmer.

But as luck, or perhaps good planning, would have it, Ibrahim found himself living in the right place at just the right time.

When EU countries closed their borders earlier this year, they effectively prevented the advancement of Syrian refugees into European countries that had more to offer in the way of opportunities.
__new_in_first_article1__

But Ibrahim had already resumed his training in Athens on the Greek mainland after building up his strength by using a wheelchair and crutches to get around after his arrival in the financially troubled country.

Ibrahim’s grit and determination did not go unnoticed and he was chosen to carry the torch through the Eleonas camp in Athens — temporary home to 1600 refugees — during the Rio 2016 Olympic Torch Relay.

At the time he told reporters that competing in the Paralympics would be a “beautiful opportunity”.

Last month, what Ibrahim had viewed as an opportunity became a reality when he was chosen to compete with the world’s top disabled athletes as one of two refugees who comprise the Independent Paralympic Athletes (IPA) team in Brazil.

__new_in_first_article2__
Although athletes have previously competed as independents at the Paralympic Games, this will be the first time that the independent team with be comprised of refugees.

Ibrahim, who lost his leg as a result of going to the aid of a friend, has now become a source of encouragement to disabled Syrians everywhere.

Tomorrow he will compete in the 100m freestyle S10 as a leg amputee.

“My friends helped me across the border. I used sticks to walk,” Al Hussein told the Thomson Reuters Foundation during an interview earlier this month in Rio.

“[Now] I have one wish – gold! I want to send a message to all those who have been injured, that you can still reach your dreams,” he said.