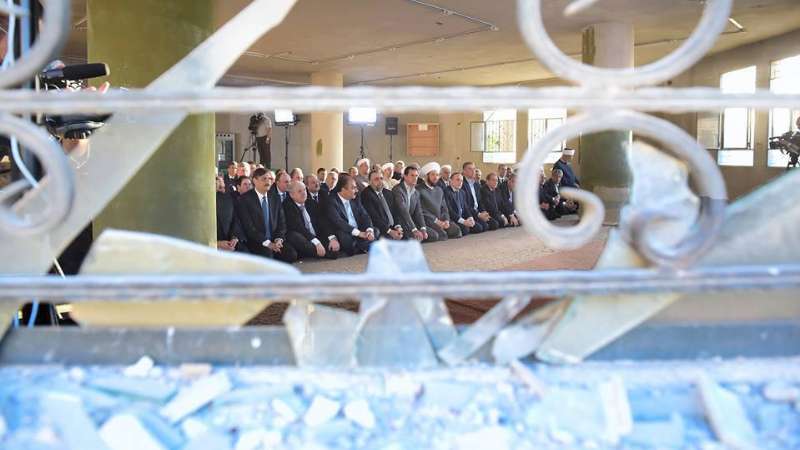 Assad agency photo
__new_Underarticle_image_EN__
Orient Net
Bashar Assad performed on Monday the prayer of Eid al-Adha (Feast of the Sacrifice) at Sa’ad Ibn Mu’az Mosque in the city of Darayya in Damascus eastern countryside, Orient News correspondent said.
"After killing thousands of its people whose graves are the solid evidence of his brutality, and after his nonstop campaign of barrel bombs filled with napalm and high explosives which completely destroyed most buildings of Darayya, Assad goes to the devastated city to show the world he is praying. "A mouth that prays, a hand that kills" is the best expression could be used to describe what Assad did in Darayya today," a Syrian political analyst told Orient Net on condition of anonymity. Before being obliged to leave, those living in Darayya have endured Assad regime’s constant bombardment, as well as suffering shortages of food, water and electricity because of his terrorists’ siege.
Syrians nicknamed Darayya, "The Capital of Barrel Bombs," in a reference to the incalculable barrel bombs dropped on its civilian areas.