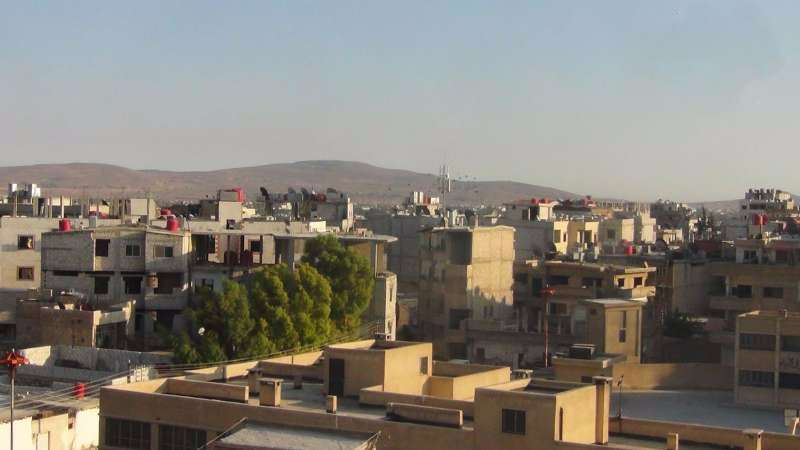 Orient Net
Assad regime has threatened the negotiations committee of al-Mo’addamyya in Damascus western countryside with destroying the city in case its population did not accept its conditions.
Assad regime’s proposed agreement stipulates opposition fighters to surrender their arms and civilians to regularize their situation, or the city would be burned by major military action, Orient Net learned from special sources.
The sources confirmed that a meeting was held in the presence of Russian officers and a number of Assad officers including Brigadier General Ghassan Bilal, in addition to the negotiations committee of al-Mo’addamyya city.
During the meeting, Assad regime refused to discuss any details. It only made a list of conditions, under the threat of burning the city in case the conditions were not accepted.
The important conditions in the agreement included, that opposition fighters, who do not want to surrender their arms, should all leave the city heading to Idlib, and civilians who do not want to regularize their situations should exit the city as well.
Another condition is that all weapons in the city shall be surrendered to the regime, including heavy, medium, and light weapons, and even personal weapons.
The conditions, put by Assad regime, also included the entry of Assad regime institutions and dismantling all revolutionary institutions, on top of which, the local council of the city.
Also, a police battalion will be formed under the name of the Interior Police, according to the agreement. It will be led jointly by Assad regime and the city residents.
It is expected for the agreement to be enforced in the coming couple of days.
Assad regime informed al-Mo’addamyya delegation that if they do not accept the agreement the city will be declared as a military zone and will be burned.