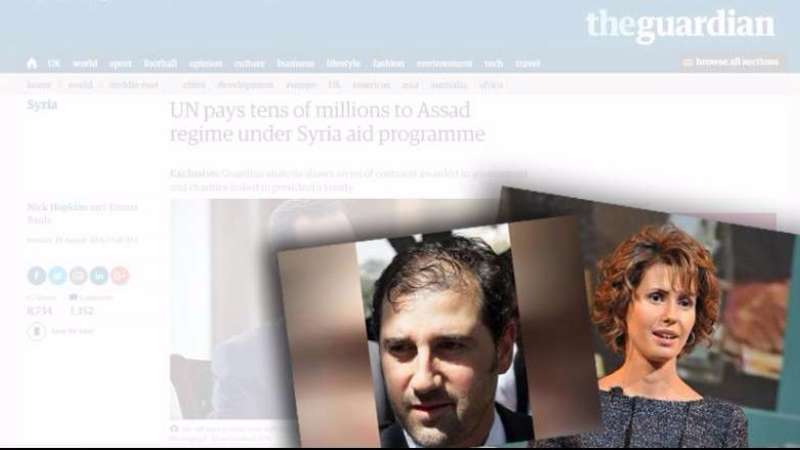 Orient Net - the Guardian
British newspaper, the Guardian, published on Monday an analysis report that revealed how UN is paying Assad regime tens of millions of dollars through a series of contracts awarded to Assad government and charities linked to Assad’s family.
The report says that substantial sums were paid by UN missions to businessmen, who own companies that are sanctioned by the US and the EU, and to Assad government departments and charities, including those set up by Assad’ wife, Asma, and his closest cousin and partner, Rami Makhlouf.
UN stressed the importance of reaching as many vulnerable people as possible, but says its choices in Syria are limited and finding partners in the besieged and hard-to-reach areas is extremely challenging, according to the report.
The report also says that critics believe that the UN mission might be compromised as aid is being prioritized in areas under Assad regime control. It also argues that UN money is helping to support the regime which is responsible for the deaths of hundreds of thousands of its own citizens.
The Guardian’s report listed many payments by the UN to Assad government, and linked-to-Assad institutions, charities, and companies which are sanctioned by US and/or EU.
Some examples listed in the report:
• The UN has paid more than $13m to the Assad government to boost farming and agriculture, yet the EU has banned trade with the departments in question for fear of how the money will be used.
• The UN has paid at least $4m to the state-owned fuel supplier, which is also on the EU sanctions list.
• The World Health Organization has spent more than $5m to support Syria’s national blood bank – but this is being controlled by Assad’s defense department.
• Two UN agencies have partnered with the Syria Trust charity, an organization started and chaired by Assad’s wife spending a total of $8.5m. Asma Assad is under both US and EU sanctions.
• Unicef has paid $267,933 to the Al-Bustan Association, owned and run by Rami Makhlouf, Syria’s wealthiest man. He is a friend and cousin of Assad, and his charity has been linked to several pro-regime militia groups.
• Makhlouf runs the mobile phone network Syriatel, which the UN has also paid at least $700,000 in recent years.
• UN agencies paid $9,296,325.59 to Four Seasons hotel in 2014-15 – which is understood to still be one-third owned by Assad’s ministry of tourism, a department outlawed under EU sanctions.
Further, the Guardian says analysis of the United Nations’ own procurement documents show its agencies have done business with at least another 258 Syrian companies, paying sums as high as $54m and £36m, down to $30,000. Many are likely to have links to Assad, or those close to him.
The UN says that its relief work has already saved millions of lives and argues it has to work with the regime if it wants to operate in Syria, the report adds.
“The UN country team knew from the early days of the conflict that neither the government nor its authorized list of local associations for partnership with the UN could be considered as befitting the humanitarian principles of independence, neutrality and impartiality,” the Guardian cited a UN official who worked in Damascus early in the conflict as saying.
According to the report, Dr Reinoud Leenders, an expert in war studies based at King’s College in London, told the Guardian that the UN needed to rethink its strategy because it had become too close to the regime.
Dr Leenders has interviewed many independent aid workers for a study on Syria. They told him some UN officials were displaying signs of “clear-cut Stockholm syndrome,” says the report.
The reports says that Syria Campaign accused the UN, in June, of breaching its principles in the conflict by effectively letting the government control aid deliveries.
It adds that more than 50 humanitarian, human rights and civil society groups back a report which said the UN had given in to demands not to help rebel-held areas, contributing to the death of thousands of civilians.