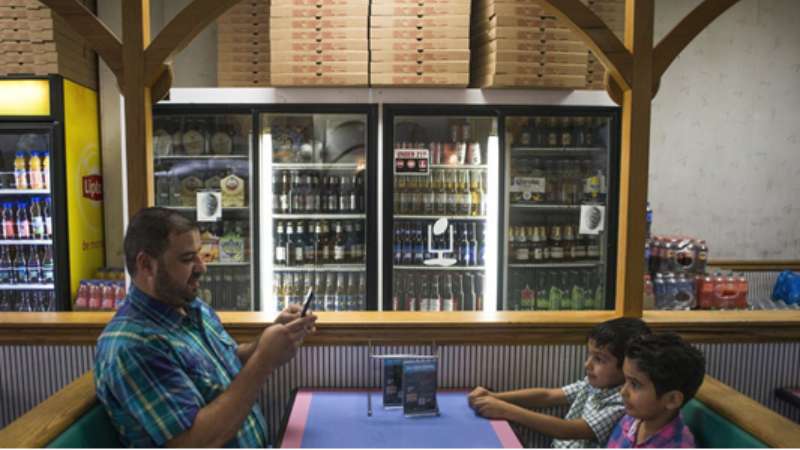 Khaldoun Alhalabi takes photos of his sons at a pizzeria in Baltimore
Orient Net - R. Sikora
The suicide bombing, gun toting Syrian refugees of Donald Trump’s imagination are a far cry from the real thing sitting in a Baltimore, Maryland classroom learning about things like the different types of bank accounts, public transportation and grocery shopping, paying rent and going to the doctor.

Most of the 16 neatly dressed Syrian men in the class have recently arrived in the U.S. and if they are hiding the fact that they are radical jihadists then they are doing an excellent job.

The class they are taking is called “Welcome to America 101”, a program run by a nonprofit group called International Rescue Committee (IRC) that helps refugees assimilate into American life.

For the most part Syrians, who have been unemployed for years and struggling just to survive in places like Jordan and Lebanon, hit the ground running once they arrive in the U.S.

The IRC’s week long, 30-hour crash course teaches them the basics of living in the United States but is just the beginning of a series of programs that are intended to have refugees speaking basic English, employed and pretty much self-sufficient by the end of their first year .

It would be a challenge for many immigrants newly arrived in the U.S. — but Syrians have faced far greater trials in the past five and a half years and welcome the chance to prove they are capable of meeting it.

Since 65 percent of Syrian refugees who have arrived in the U.S. in recent years are children, the fathers amongst them are more than anxious to get back to being able to support their families.

The fact that the majority of Syrian refugees are Muslim has sparked anti-Muslim tirades from Donald Trump but the exaggerated campaign rhetoric is not supported by the facts.

Since Sunni Muslims comprised a high percentage of the population in Syria when the revolution began in 2011, it makes sense that the majority of refugees are Muslim, especially since they are the group most targeted by the Assad regime and its allies.

But a 2007 Pew Research Center survey found that Muslim immigrants are “decidedly American in their outlook, values and attitudes.”

Yet Trump and other critics claim Syrian Muslims should be barred from entering the U.S. because they are resistant to assimilation and that integration won’t work with those who have recently entered.

Implicitly, he is suggesting that a system that has been successfully integrating millions of migrants from different backgrounds and religions into American life over the centuries has reached its limit.

But Kevin Meadowcroft, senior program manager for IRC, says that roughly 95 percent of the refugees in Baltimore are self-sufficient by the time their services end and that other programs across the country report similar success.

The U.S. was protected geographically from the humanitarian crises being facing by Jordan, Lebanon, Turkey and Europe due to the surge of millions of refugees pouring over the porous borders of Syria in search of safety and the chance to start a new life.

But the country that has a long history of welcoming immigrants from troubled lands came under much criticism when it had only resettled a few thousand refugees from war-torn Syria almost four years after the conflict began.

Last year President Obama called on the U.S. “to step up” and set a goal of resettling 10,000 Syrian refugees which should be met by September 30.

Contrary to opponent’s claims that he could be putting Americans at risk of terrorist attacks, Obama believes that welcoming Syrian Muslims weakens groups like al-Qaeda and ISIS by contradicting their message that America is at war with Islam — and Deputy National Security Adviser Avril Haines agrees.

But Trump’s rhetoric is easily spewed and just as easily swallowed without question by many of his supporters.

Yet when rational thinking Americans come face to face with actual Syrian refugees, instead of the abstract caricatures created by the anti-Syrian rhetoric, their reaction seems to be different.

In many areas of the country where refugees are being sent, groups of volunteers and charitable organizations have been collecting donations of furniture and household items to help fill the monetary gaps in the current resettlement system.

And the sense of community that is created by such efforts becomes a blessing to all parties involved which makes the current political atmosphere more than tolerable for refugees like 36 year-old Khaldoun Alhalabi who fled the country with his wife and four kids when the Assad regime bombed their home in Homs.

He chuckled when asked by Newsweek reporter Gabriella Demczuk if he had heard about the anti-refugee rhetoric from Trump and other politicians.

Alhalabi admitted he was aware of what was being said but was not overly concerned because he was facing far greater challenges like learning English and helping his children recover from the trauma of war.

“I came here for my kids to get an education,” he told Demczuk, “I don’t want them to see what I saw…in Syria.”