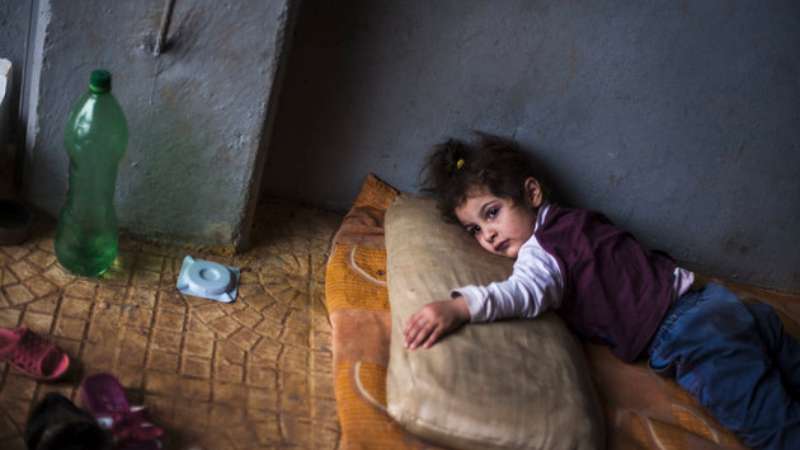 Rada Hallabi, 4 year old sick with diabetes.
Orient Net - Syria Deeply
Dr. Hosam Kara, a physician in Idlib, has been treating Hasan Ali for nearly a year, since the 22-year-old began to feel intense pain when urinating.
Initially, Ali believed he had kidney stones, but his lab results showed that he had a chronic disease that meant a lifetime of treatments, monitoring and struggle.
Ali has type 2 diabetes, a heavy burden for someone living in an area where chronic illnesses fall through the cracks of a healthcare system overstretched by a constant stream of war wounds and a dwindling number of medical professionals.
Dr. Kara is an internal physician by training, but since the start of the Syrian conflict in 2011, his work with patients like Ali has been largely overshadowed by treating those with war injuries. Yet, diabetes has been one of the most prevalent illnesses in Syria both before and during the conflict. At least one in 10 Syrians live with diabetes, according to the World Health Organization (WHO). If left untreated, diabetes can cause complications that are just as deadly as bombs and bullets.
“Patients with chronic or internal illnesses are neglected here. The [medical] centers and donors put a higher priority on war trauma patients,” Dr. Kara said.
Diabetes is a noncommunicable disease where the body either does not produce enough insulin, or cannot effectively use the insulin it does produce. Insulin is a blood sugar regulating hormone, and without it, blood sugar, or glucose, levels rise in the body, leading to severe complications if left untreated.
In Idlib, only two medical facilities provide internal care services, which is not nearly enough, especially when factoring in the large number of internally displaced people, more than doubling the population in certain towns, Dr. Kara said.
The lack of specialized staff – or medical staff in general – only makes matters worse, Dr. Kara said. In Idlib, only two endocrinologists are left. At least 365 attacks have targeted medical facilities in Syria, and 738 healthcare workers have been killed, according to the global non-profit Physicians for Human Rights.
The biggest challenge for diabetes patients in Syria is getting necessary treatment. Patients need daily doses of insulin with each meal to be able to maintain their blood sugar levels.
Complications of untreated diabetes include blindness, stroke, kidney failure and cardiovascular diseases. Without enough insulin, diabetes patients can develop a blood chemical imbalance – diabetic ketoacidosis – that can cause difficulty breathing, brain swelling and comas.
But even those who are aware of the consequences face insurmountable difficulties obtaining the treatment in war-torn Syria. The only insulin available is either imported or provided by aid organizations. The WHO estimates that more than 60 percent of insulin-dependent diabetes patients are at risk of complications.
Imported insulin is often unaffordable for many patients. In Idlib, treatment can cost around $ 40 a month, but the average monthly income is between $ 20 and $ 30, said Dr. Kara. Some aid organizations, like the WHO and the Syrian American Medical Society (SAMS), an organization providing cross-border aid to medical facilities, provide free insulin, but are unable to meet the requirements of all patients or reach all areas in need.
“High expenses aside, a lot of medication isn’t working, especially the insulin,” said Kholod, a 27-year-old business student in Damascus whose mother has the disease, and who asked that her family name not be used for security reasons.
“My mother was heavily affected by her blood sugar not going down and developed bone-deep sores on her body, and they’re not healing.”
Insulin is a sensitive drug that needs constant refrigeration to maintain its usefulness, a difficult feat in a country with regular electric outages and fuel shortages. Although many medical facilities have installed generators to keep their refrigerators running, most patients do not have access to, or cannot afford to run, their own generators. Dr. Kara said he had received shipments of insulin that would reduce a patient’s blood sugar level, because it had been poorly stored. He added that he had not received any additional medical shipments since June.
Turkish border customs are also a major hurdle for aid organizations providing cross-border deliveries to northern Syria, said Dr. Ahmad Rami Moqdom, logistics manager at SAMS. SAMS takes meticulous precautions to preserve insulin during transport, but the border’s slow, bureaucratic procedures mean shipments can be held up to two months, risking the hormone’s effectiveness.
Funding is another obstacle for aid organizations trying to fill the healthcare vacuum. Some donors only fund insulin for children with diabetes, said Dr. Moqdom, and intermittent funding from others only covers a patient’s needs for a few months at a time.
“The absence of detailed statistics for patients also makes getting sufficient support and funding for them very difficult,” said Dr. Moqdom. “We are discovering that the estimated numbers are less than the full number of patients [in need] in Syria.”
Having diabetes in a hostile environment also presents unique risks as the disease makes wounds very difficult to heal. Even a minor war injury can cause severe infections for a diabetes patient. “It creates a vicious cycle,” said Dr. Kara. “Diabetes increases the risk of infections, and infections make the diabetes worse, which often means they have to get amputations.”
At least 3 percent of the amputations that Dr. Kara has overseen during the conflict have been diabetes-related. What’s more, the stress and fear induced by intense violence has led to an increase of non-hereditary type 2 diabetes. It’s a very probable cause of Ali’s recent diagnosis. “I live in an area where there are constant airstrikes, fighting, bombing. It’s just terror,” Ali said.
“It’s not an illness that goes away. Patients are dying,” said Dr. Kara. “They know they are diabetics, but suddenly their situation gets bad, they get taken to a hospital and they die.”