One mother to another, Syrian refugees learn to cope 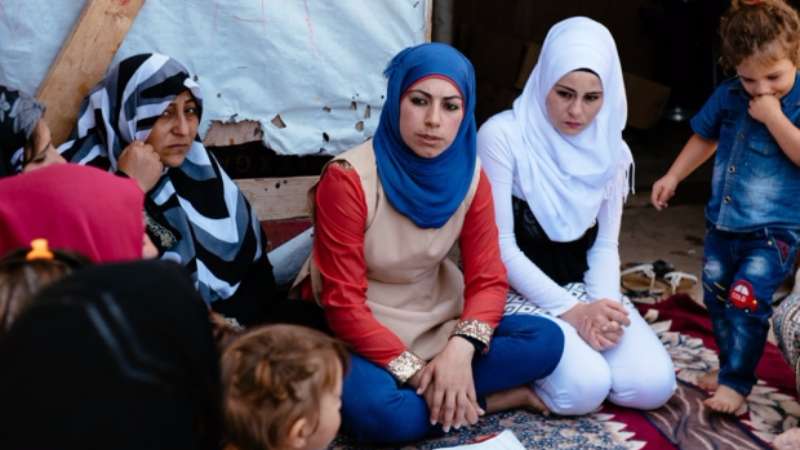 Orient Net - Mercy Corps
The ramshackle cinderblock structure casts a shadow over a concrete pad in the heat of the Lebanese morning. A group of women settle into a circle in the shade.
Some of them have created small apartments in the building with their families; others live in makeshift tents crowded around. They sit on plastic mats and pour thimblefuls of thick, Arabic coffee and sweet juice to share.
Suzanne, 33, starts the conversation. The women ask her how to deal with common child behavioral issues, like tantrums. She shares some ideas about how to talk to their young children, establish rules and consequences.
One of the mothers tells the group how stubborn her young son is. Suzanne explains that stubbornness can be part of normal childhood development. She also suggests to the mother to stay engaged with the boy, and be flexible with him, offering him choices that help him experience the feeling of control. The mothers seem to like this idea.
Suzanne is a coach for a Mercy Corps program designed to help families in struggling refugee communities in Lebanon. In the group, she tries to create a safe space for Syrian women to share their challenges – and learn the skills to cope.
There is a lot to talk about.
“They are living in shelters that are not exactly great. There is a big problem of unemployment, and therefore poverty … They have the responsibilities of cooking, cleaning, taking care of the children, and also sometimes working from home,” Suzanne says.
“Let’s not forget the pressures that these women have sometimes will take a toll on their children,” Suzanne adds. “These sessions are also basically a place where they can let out their stress, talk, and open their hearts, because most of the time they don’t have the space to do that.”
And Suzanne would know, because she is also a mother – and a Syrian refugee.
Struggles almost send family back to Syria
Suzanne and her family were living in Daraa in 2011, the site of the first protests of the Arab Spring in Syria. She remembers shelling and armed men going house-to-house. She remembers how scared her four young children were.
Her husband was detained. “I had no idea where my husband was, or if he would get out,” she says. After a month, he was released and the family sought safety in Damascus.
But it didn’t take long for the crisis to follow them to Damascus. It was too dangerous to send the children to school. “We said ‘Okay, we have to get out of the country as whole, because this is spreading.’ So we decided to come to Lebanon.”
When Suzanne and her family first arrived in Lebanon, they depended on some of her husband’s distant relatives who lived in and around Beirut for shelter. The family was in the first wave of refugees from Syria, and it was unclear how to set up a life in this new country.
“We were living at all of these people’s places, I had no idea who they were, and we didn’t know what we were going to do in the future,” she says. “So I really thought that it was better for us to go back to Syria. At least we knew people. It’s our country, and whatever happens, happens.”
It was hard to find a school willing to enroll the four children, but Suzanne searched until she did. With the kids finally in school, she decided it was better to stay in Lebanon.
Adjusting to refugee life in Lebanon
The transition was difficult for the children. Rayan, 11 at the time, had always been an A student. In Lebanon, she struggled because of the new curriculum. Lessons were taught not only in Arabic, but in French, which she didn’t speak. Additionally, she had missed almost a year of school as the family moved around Syria and Lebanon.
Suzanne says Rayan would cry in frustration at times, “because she couldn’t understand, or because she wanted to put in more effort but couldn’t. I told her, ‘If you want to do something, if you want the distinction, if you want to learn French, even though it’s hard, you can do it. Nothing is impossible, you just have to work a bit harder to achieve what you want.’”
Suzanne’s husband eventually found occasional work in a factory that recycles plastic bags. Suzanne was a kindergarten teacher in Syria, but couldn’t teach in Lebanon. Instead, she started helping a neighbor with her two disabled children.

Leaders of a local organization that partners with Mercy Corps got to know Suzanne through her work with those two girls. They recommended her as a coach for the women’s groups.
Why investing in changemakers makes sense
On this day in the informal settlement, Suzanne teaches the mothers about positive parenting. In upcoming meetings they will focus on issues families with older children face, such as child labor, gender-based violence, and early marriage.
Mercy Corps works in 35 villages here, giving nearly 40,000 kids and parents information and activities that help them build the strength to overcome the challenges of displacement, trauma and poverty.
Mercy Corps does this by learning who the changemakers are in each community and starting there. Changemakers like Suzanne.
Suzanne’s personal experience makes it easier for the women in her groups to open up to her.
“I always start my sessions telling them ‘I came here as a refugee,’” Suzanne says. “We had a problem with unemployment. My husband and I were out of a job for a long time as well, but we tried our best to make things better. We actively sought for things to do. We got to know people better, we got out of the shell we were in, and this helped us a lot in life.’
As Suzanne learned more about positive parenting from our curriculum, her own parenting style changing – and her children started behaving for the better. “When I give these sessions, the women are taking them very, very positively and I feel like they’re going to start implementing them.” Suzanne says. “I know it’s going to make a difference, because it made a difference with my children as well.”
Today Suzanne and her family are able to rent a small apartment. Rayan studies for the national exam all students in Lebanon take before they enter high school. She and her siblings are back at the top of their classes.
Suzanne says finances are still tight for her family, and she can’t afford to give her kids many of the things they want. But she tells her children they are lucky compared to so many.
“We are here in Lebanon, and we rent a house. Some children are still stuck in Syria. Some are living in settlements. Some children lost family members.”
Every refugee struggles with loss. In a war as cruel as Syria’s, for every horrible story, there’s someone who has it worse. But among the women in the informal settlements, Suzanne knows she can be a symbol that life can also be better.
More than that, she can guide them there.