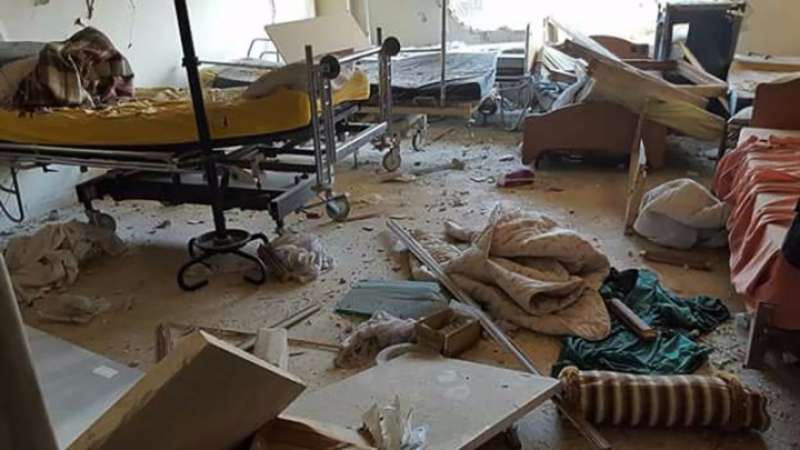 A scene from inside the destroyed hospital in Idlib. (MSF)

An Médecins Sans Frontières/Doctors Without Borders (MSF)-supported hospital serving a population of 70,000 people was destroyed by aerial bombing in Millis town, Idlib Governorate, Syria on Saturday 6 August.
Four hospital staff and nine others, including five children and two women, were killed in the two aerial strikes that hit the hospital directly and the two strikes that hit the immediate vicinity of the hospital at around 2:00pm local time.
Six other hospital staff were wounded. The bombing substantially destroyed the building. This comes in the midst of an escalation in intensity of conflict in Idlib Governorate.
The bombing destroyed most of the hospital building, including the operating theater, intensive care unit, pediatric department, and around 80 percent of the medical equipment – including ambulances and a generator.
__new_in_first_article1__
Specializing in pediatrics, the hospital provided emergency care or consultations for around 250 patients per day, many of them women and children.
Since early 2014, MSF had supported this hospital with supplies and technical advice, and later with financial support for the hospital staff to enable them to continue their work.
“The direct bombing of another hospital in Syria is an outrage,” says Dr Silvia Dallatomasina, Medical Manager of MSF operations in northwest Syria.
“We repeat our urgent call to all those with influence on the conduct on the war in Syria, including the four out of five UN Security Council permanent members that are participants in the war, to urgently effect change to stop hospitals being hit in the course of the fighting,” says Dallatomasina.
قيم هذا المقال 24 0