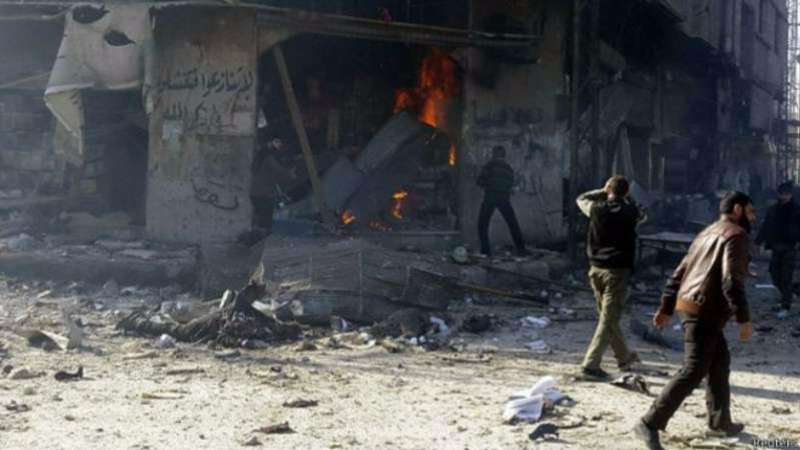 Orient Net
Early today, eastern Ghouta in Damascus countryside was heavily targeted by Russian warplanes in which many civilians, including women and children, were killed and many others were injured.
Orient correspondent Mohammed Abdul Rahman said that the Russian war planes targeted Mudayra town in Eastern Ghouta with many air raids killing a whole family, the parents and the three children.
Russian warplanes also targeted Ein Terma in Eastern Ghouta killing one woman in addition to many air raids on Kafr Batna, Hazza, Erbeen, Jesreen and Hosh Nasri. Russian bombardment burned the municipality building in al-Shefouneyya town.
Meanwhile, Assad terrorists are trying to make use of the Russian bombardment to progress in al-Meed’ani and Hosh Nasri fronts but opposition fighters targeted their strongholds with locally made shells and killed and injured many of the terrorists in addition to the destruction of a tank killing and injuring its crew.
Fighting also continues on Darayya fronts between opposition fighters and Assad terrorists while Assad jets hurled more than 20 barrel bombs on residential areas. Darayya was also targeted with surface-to-surface missiles in addition to the shelling of the nearby Moaddammeyyet al-Sham with heavy artillery. Helicopters also perpetrated many air raids on Khan al-Sheh camp and its surrounding with no casualties reported.