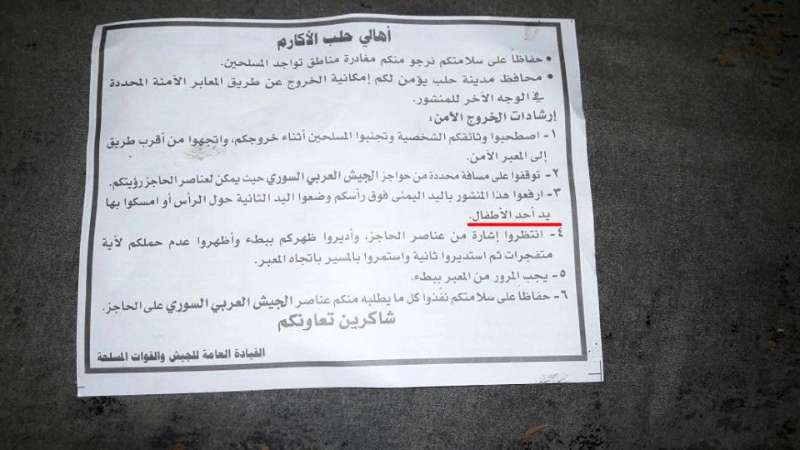 Assad regime's leaflet - Aleppo
__new_Underarticle_image_EN__
Orient Net
After the intensification of air attacks on opposition-held areas in Aleppo, Assad warplanes dropped on Thursday hundreds of leaflets over the opposition’s enclave calling in which civilians to surrender and leave the city.
"These leaflets are addressing civilians to leave their homes and properties. They are calling civilians to carry the leaflet in one hand and hold their children in the other. This is a solid proof of the indiscriminate attacks on women and children in residential areas of Aleppo by Assad regime, a Syrian activist from the local council told Orient Net.
Some Syrian activists say that these messages of intimidation in which Assad terrorists address civilians are but a a step in which Assad aims at emptying out Aleppo of its people like that step which Assad regime did in Homs two years ago.
It is worthy to note that Russian defence ministry said it would send experts to Geneva to discuss Aleppo, Syria, crisis, at request of US Secretary of State. On his side, the Russian defence minister also said 3 corridors would be established by Russian-Assad militaries for civilians to leave the city.