Political repercussions of the failed coup attempt in Turkey 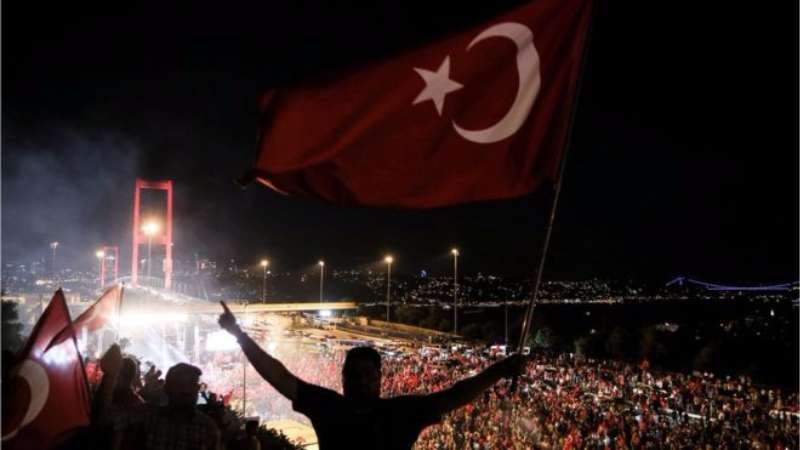 Majid Azzam
The failed coup ended the coup possibilities in Turkey for good and it possibly ended the first centenary of the Ataturk Turkish republic, opening the second that will be par excellence Erdoganian.

No doubt Erdogan is one of the winners. In fact, he is the most prominent winner from failing the coup.

His courageous and decisive TV appearance on the night of July 15 ignited the spark of the revolution against the coup and made its defeat a matter of time or only hours.

After that, all other issues, though important, became no more than details in the grand historic scene including that of people taking to the streets in millions, that of the police steadfastness, the unity of the political ring and the unity of media, despite differences, to defend democratic legitimacy and the present and the future of the country.

The big political victory, even the historic for Erdogan, will make him more capable of being decisive in the three big internal issues resulting from or linked to the coup directly or indirectly: first, confronting Gulen or the parallel entity penetrating the different civil and military state’s bodies and, secondly, restructuring the army and the intelligence following the shortcomings and the failure that became apparent in their performance and, thirdly, the mechanism of constitutional amendment and the shape of the new constitution and whether it will guarantee the change to the new presidential system or not.

The most important mission is represented in cleansing the state institutions and its administrative body even the private sector and the civil community organizations from the members of the parallel entity that is directly responsible for the last military coup months after recognizing it as a terrorist organization and a danger on national security.

This is not easy or simple as it seems to some people. Here we are talking about tens of thousands of members and tens of private institutions. If the issue really needs decisiveness and rigor in confronting the coup plotters and perpetrators, justice is required to maintain stability and civil as well as social security and to guarantee that the innocent are not harmed and finally to guarantee that the ideology of revenge does not substitute that of justice and realizing rights.

It will be also high time the army restructured. Despite the non-involvement of Turkey’s Chief of Staff and the high ranking officers or the leadership hierarchy in general, they, however, were unable to overthrow the coup - although reforms started gradually years ago since the AK Party became in power and constitutional amendments that prevented the army’s interference in politics were endorsed. They however, kept matters related to the army under the command of its leadership without supervision or actual political or even parliamentary accountability.

The case is now different; restructuring will be under the supervision of the elected political leadership and there will be no exclusion of any social entities or any members of the people who want to join it while, of course, keeping professional matters in the hands of its leaders. Army will be consulted in national and security issues that might harm the interests of the country as is really happening in the national security council which meets once every two months or in the supreme military Shura council  that meets once every two years.

The atmosphere of national unity that is clear in confronting the coup and the shoulder-to-shoulder of the political parties and that of different social media to defend democracy and the legitimate institutions will definitely decrease the sharp polarization that prevailed before the coup especially that related to the argument about the new constitution and the transfer to the presidential system instead of the current parliamentary system. As the prime minster has said: there will be a new start with the opposition parties.

Even Erdogan himself, in his interview with Reuters on Thursday, July 21, and despite his reservation on the rejection of some opposition parties of imposing the state of emergency, he talked about concord regarding constitutional reforms and pointed specifically to the possibility of incurring limited amendments to be followed by a popular voting. Certainly, he is referring to the idea of the proselyte president which in limited to the amendment of few items in the constitution. This means avoiding disputes or the sharp division concerning the formation of a new constitution including the direct, clear and straightforward change towards the presidential system on which side political and social sections have reservations although no doubt the idea will remain on the table even if postponed for some time.

The political might president Erdogan acquired after thwarting the coup and the state of political popular unity are supposed to reflect also on the management of external files or politics. The track of the current calming to maintain the Turkish national interests will continue as is the case with normalization with Russia and Israel. Here, Syrians or Arabs who sympathize with the Syrian revolution are to be assured and contended because the just Syrian case became part of the Turkish national security, especially when it concerns the rejection of establishing a Kurdish entity or dividing Syria while committing to Geneva I communiqué as a principle for just and sustainable solution in Syria without ignoring the moral and political responsibilities towards the Syrian refugees in Turkey, even with the dispute about the proposal of offering them, or some of them, the Turkish nationality.

The most important change in external politics will take place in the relation with the US and Europe. With the political and social certainty or quasi-certainty about the involvement of the US and the west at large in the coup by giving a green or amber light or the mere knowledge without informing or warning the authorities will be to and fro with the US about the story of delivering Gulen.

As is the situation in Incirlik Air Base, an operational center of the attempted coup, and with the change of the US tone and its inclination to calmness and being ready for a serious negotiation to deliver Gulen and with the coup plan in general, the relation will not get worse with the two sides caring to maintain temporal, strategic and common interests. Undoubtedly, shadows of suspicion and mistrust will be there between the two countries. The presidential change in the US may lead to give a push to the relations in particular - if Hilary Clinton wins and the new administration follows a serious change of its politics in Syria and the region in general.

The case will be more difficult with Europe, especially with the congestion about the refugees’ agreement, and the Europeans’ rejection of reinstating the death penalty, which seems to be inevitable in Turkey especially towards the coup leaders and those responsible for targeting civilians and the Turkish sovereign institutions. Negotiations of Turkey joining the EU will certainly scramble and possibly the file of refugees will scramble as well. But, in general, there will be care about reasonable relations for security, political, temporal and strategic relations. This failed coup attempt and the government retaliation will represent a distinction in the relation between the two countries.

The political might that president Erdogan acquired will encourage him to proceed with the directions he adopted since the last governmental change represented in openness towards China and Japan in the east, Latin America in the west, Africa in the south, and in the improvement of relations with the Arab countries and improving commercial exchange especially with Gulf countries.

Contrary to what many expect, there might not be a big escalation with Egypt, but things will go on after a while towards calmness and economic normalization following the statement of Turkey’s Prime Minister Binali Yildirim a short time before the coup.