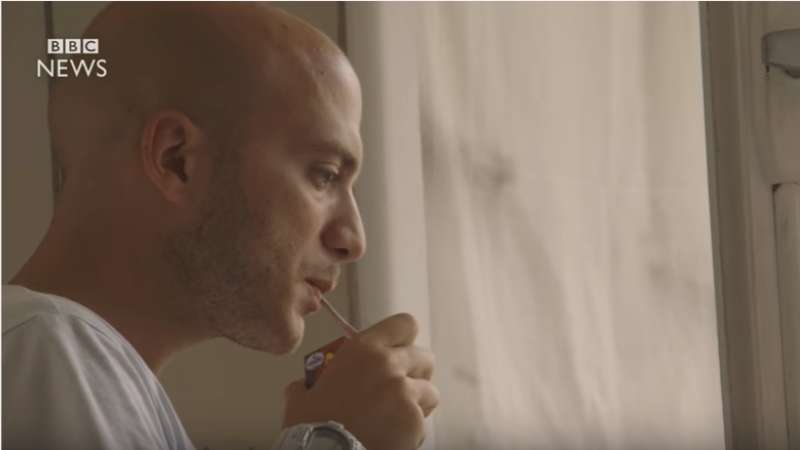 A screenshot of Hassan Akkad in the BBC documentary: Exodus
Orient Net - The Independent
A young refugee girl from Syria has revealed how two children she was travelling with died of the cold while trying to make it to Germany.
In footage shown in the BBC documentary "Exodus", Isra’a, along with other children and women, huddle together and jump up and down for warmth in the snow on the Serbia-Croatian border.
“We found a tent and made a fire,” the 11-year-old said, recalling the incident, “and there were two kids who died from the cold.”
In the film, a woman is seen saying: “I beg you get us out of here. The cold is killing us.”
Isra’a appeared with her father in the second episode of the three-part series. He said: “Here is the problem. She [Isra’a] is seeing things that she can’t cope with.”
“I was trying to stop it getting to her on the road. But you can’t avoid it. It’s a heavy burden. And she shares the burden.”
Isra’a’s home in Aleppo was destroyed by bombing. She had to sell cigarettes on the street to raise the € 12,000 it cost to get her family to Greece.
According to the UNHCR, children made up 51 per cent of the world’s refugees in 2015. Many had been separated from their parents or were travelling alone. In total last year there were almost 100,000 asylum requests from unaccompanied children.
Hassan Akkad, a Syrian English teacher and photographer, who also appears in the BBC documentary, told The Independent he had seen many vulnerable people and children struggle with the journey across Europe.
When he and more than 60 others made the crossing across the Mediterranean, the dinghy they were in sank. "Everyone was terrified, you could see on their faces," he said.
"Having women and children on the boat also made it more terrifying, we were scared for them. I felt so helpless."
They were eventually rescued, but one of the pregnant women on board started bleeding. She later miscarried.
One man Akkad met in Macedonia was making the journey to Europe on crutches. Both his legs had been blown off by a bomb in Iraq and he was making his way to Germany alone to try and get treatment.
Akkad added that the struggle of the journey across Europe was re-traumatising many who had suffered at the hands of the Assad regime in Syria.
After Akkad peacefully protested against the regime in 2011, he was thrown in a cell with 105 other people. "We were stacked on top of each other," he said. There were cockroaches in the cell with them.
Assad’s terrorists broke both his arms and two of his ribs. His left leg was so badly damaged after he was beaten it nearly had to be amputated.