Pascal Hanrion to Orient Net: I run for Syrian children

Pascal Hanrion to Orient Net: I run for Syrian children 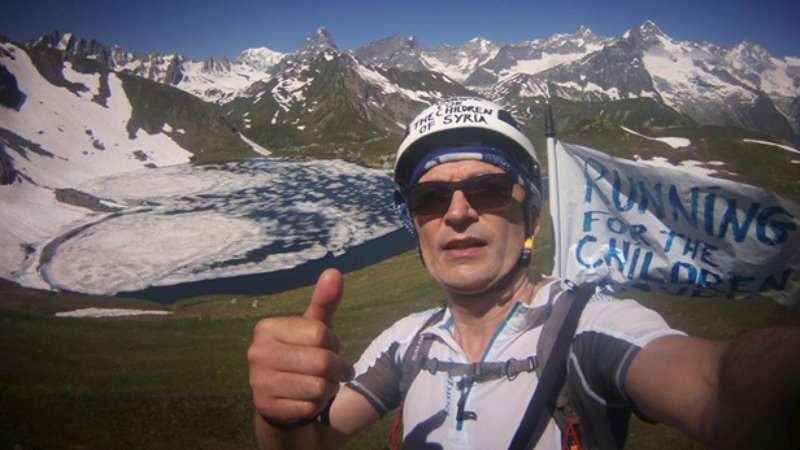 Running on snow next to the top of the Col de la Fenêtre
__new_Underarticle_image_EN__
Orient Net - R. Sikora
Wearing an authentic white helmet signed and sent to him by White Helmets rescue workers in Syria, Pascal Hanrion from France ran this past weekend in the Trail Verbier-St. Bernard (TVSB) race in the Alps of Switzerland.

Hanrion, who has been supporting the Syrian people’s fight for freedom since the revolution began in 2011, has been training in France and running in international trail races for years.

Hanrion told Orient Net that he has run approximately ten races so far which he has dedicated to the children of Syria.

His previous races included the "Trail des Tranchées" (in English the Trail of Trenches), an international event which reveals the Battlefield of Verdun in northeastern France through an innovative angle.

The race is limited to 1916 participants in honor of the historic battle that took place there in that year.

Hanrion told Orient Net that the Trail of Trenches was an especially emotional race for him -- not only because he was running for the children of Syria, but because his great grandfather had died in the Battle of Verdun in 1916 along with 300,000 others in the conflict that lasted 300 days.

It was the longest single battle in history with millions of shells fired over 10 months.

By the time the French came out victorious at the end of December, 1916, an area larger than the city of Paris had been destroyed.

The French labelled it a ’Zone Rouge’ (Red Zone) shortly after the end of the war and decided to leave it to be reclaimed by nature.
__new_in_first_article1__

A century later the ground is still filled with arsenic, littered with unexploded shells, and strewn with barbed wire. Parts of the forest are still so dangerous the French have sealed them off and local farmers continue to turn up shells while working their fields.

Concerned that a similar fate may be held by the children of Syria, Hanrion carries his love and concern for them in every race that he runs.

“I’ve found my way to [educate] and [promote] awareness about the war in Syria, the situation of the children, and the fantastic work of the White Helmets,” Hanrion told Orient Net in the afterglow of completing his latest race.

A week before the race in Switzerland, Hanrion was pleased to receive a helmet from his Syrian hero friends in Jisr al-Shughour,  a city in the Idlib Governorate in northwestern Syria.

“I have received this morning a White Helmet from Syrian Civil Defense team of Jisr Alshgour, in Idlib / north of Syria,” Hanrion said in a post on Facebook.

“It will be an honor for me to hold it next week, during the prestigious running of the "Verbier/Saint-Bernard" race in Switzerland,” he added.

A new trail race series, the TVSB was started in 2008 and has proven to be a popular addition to the Swiss trail running circuit.

The race currently consists of three different events with the famous resort village of Verbier as the finish point for all events.

__new_in_first_article2__
The entire Verbier-Saint-Bernard race trail is comprised of an enormous loop through some of the most beautiful mountain terrain and villages in Valais, on the border between Switzerland and Italy.

Runners pass by a number of alpine huts, through the villages of Champex, La Fouly and Bourg St. Pierre, as well as the historic monastery at St. Bernard Pass.

The Traversée, the event which Hanrion ran, is the most popular event. It begins in La Fouly,  passes through wild alpine pastures, high cols, mountain huts and the Col St. Bernard before reaching the finish line in Verbier.

The Traversée trail is 61 km long and ascends up into the Alps to an altitude of 4100 meters before descending back to the town of Verbier.

An exclusive photo shows Hanrion in the high elevation of Le Col de la Fenêtre where he told Orient that he was running on snow and it was very cold.

The annual TVSB  is a family event that runs for an entire weekend and includes a “Discovery Trail” run for kids around Verbier as well as a few, short trail sections for those who are not able to run the longer trails.

Hanrion’s next race will be the “Challenge de l’Atlas” in Morocco in October.

Called the “Ultra Trail Atlas Toubkal” (or simply UTAT), the race trail takes runners across the Toubkal Mountain in southwestern Morocco -- the highest peak in the Atlas Mountains on the continent of Africa.

In his role as trail race ambassador for the children of Syria, Hanrion is undoubtedly one of the most unique revolution supporters of those who are committed to educating the world about the grave situation Syrian civilians are facing -- as well as raising awareness and support for the courageous White Helmets who risk their lives daily rescuing them from the devastating bombs of the criminal Assad and his equally brutal allies.