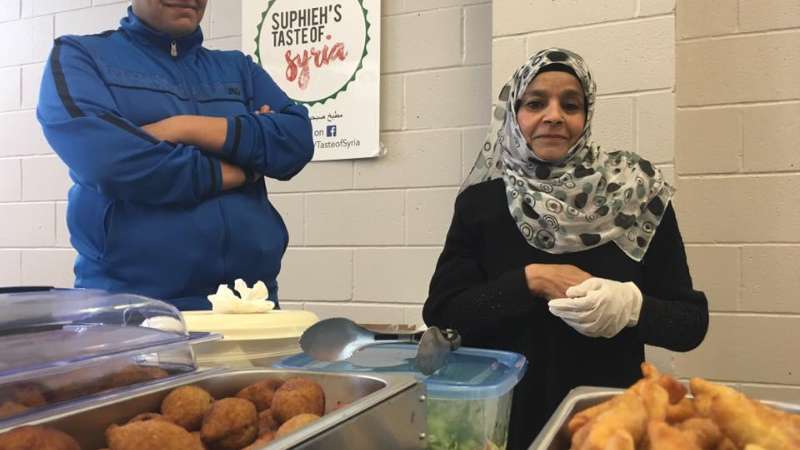 Orient Net - The Globe And Mail
For nearly a decade, Mona Bassaj and her husband Ihsan Agha owned and operated a small sewing factory in the suburbs of Damascus, Syria, where they designed and made uniforms, dresses and other garments for various companies and clients.
Bassaj and Agha lost their business in Syria’s conflict. They fled to Lebanon with their two sons and lived there for a few years, until arriving in Calgary in January, privately sponsored by Bassaj’s sister.
Now living in the basement of Bassaj’s sister’s house, it hasn’t taken long for the couple to return to entrepreneurship.
In April, Bassaj’s niece, Nancy Ferris, helped her start a Facebook page for the couple’s new business specializing in tailoring and alterations, Designs by Mona. After advertising to friends, family and an organization supporting Syrian refugees, orders started rolling in.
Canada has welcomed 27,580 Syrians, who arrived between November 2015 and May 2016. The influx of newcomers are now looking for work, leading some Syrian refugees to start small businesses in their new communities.
“The odd jobs, the casual work, that’s always there. But in terms of getting full-time jobs, that’s a little harder,” says Saima Jamal, co-founder of the Syrian Refugee Support Group, a citizen-led assistance organization in Calgary. “Sometimes starting a business is the way forward.”
Speaking through a translator, Bassaj says she opened her own business “to support myself and get on my feet and start moving forward.”
Bassaj and her husband’s factory in Syria had 20 pieces of equipment and numerous employees; they’re now working out of the basement where they live, using three machines.
“I am starting small, just doing alterations and dressmaking and such, but my dream and my hope is this will grow to a bigger business where I can do drapery and home designs,” she says.
Some Syrian refugees, like Bassaj, are trying to rebuild businesses they lost in the conflict. Others, like the Alhishan family in Fredericton, N.B., are new to entrepreneurship.
In Syria, where the family lived outside of Damascus, Eid Alhishan worked in a government office, while his wife, Suphieh, was a stay-at-home mom to three sons.
The family arrived in Canada in January as government-assisted refugees. In May, they started selling food on Saturdays at Fredericton’s Cultural Market, under the name Suphieh’s Taste of Syria.
Alhishan starts cooking early Saturday mornings, around 3 a.m., to ensure her dishes are as fresh as can be. Her husband and her oldest son, Fawaz, 21, help set up the food stall and take orders, practicing their English with customers, while Alhishan serves the food.
“I like that all our customers are happy when they get the food. They all smile,” says Eid Alhishan, speaking through a translator.
Already, the family is thinking beyond the once-a-week food stall. “We’re trying to see what people like from the dishes and what’s popular,” says Fawaz Alhishan. “We would like to grow the business, and hope one day to open a restaurant.”
Alex LeBlanc, managing director of the New Brunswick Multicultural Council Inc., which has overseen the province’s resettlement efforts of government-assisted refugees, says new business ventures are launching across New Brunswick.
“We’re seeing individuals who are really eager to give back, to deliver value for the communities they’re living in now,” LeBlanc says.
In Saint John, efforts are underway to help more than a dozen Syrian men who worked as barbers get licenses in Canada. In Moncton, the Syrian Women’s Association of Greater Moncton plans to help Syrian women start and manage small business initiatives, such as selling products at farmers’ markets.
Such businesses are possible because of community support, LeBlanc says. “There’s paperwork and formal processes that you have to go through to set up a business, but we’re seeing volunteers and community organizations step up and support that,” he says. “Where there are challenges, there are people there willing and eager to help.”
That’s been true of Rita Khanchat’s experience, starting a catering company in Calgary. Syrian Cuisine Made with Love recently filled its biggest order yet, for 250 people.
Khanchat was a broadcast engineer in Aleppo, Syria; her husband was a lawyer. The couple and their five-year-old son were privately sponsored by a friend of a friend, and arrived in Calgary in December.
Knowing it would take time and money to retrain as a broadcast engineer in Canada, Khanchat looked for other work. She was encouraged to start her own company after cooking traditional Syrian food for visitors, including Jamal, of the Syrian Refugee Support Group.
“Right away after I tasted her food, I said, ‘This is amazing. You should start cooking and taking orders,’” Jamal says.
Volunteers with the Syrian Refugee Support Group helped Khanchat make a menu, set prices, and start a Facebook page featuring photos of her dishes.
The group has also encouraged and helped other Syrians start businesses, Jamal says. While she believes newcomers should be focused on learning English right now, she has also met many privately sponsored refugees desperate to find work. Private sponsors are expected to cover their refugees’ costs for a year, but in some instances, that doesn’t happen.
After local media reported on the new business run out of Khanchat’s basement apartment, staff with the City of Calgary reached out to help her get a business license and meet health regulations. Meanwhile, a local business owner offered Khanchat use of his commercial kitchen.
“A lot of people have helped us with everything, they’ve given us a lot of things. We promised them that we will be a good part of society,” says Khanchat, who recently spearheaded efforts that saw Syrian refugees in Calgary raise money for the evacuees of the Fort McMurray wildfires.
Such assistance behind the scenes, as well as ample support from customers, has paid off: Khanchat has hired two Syrian refugees. “I gave the ladies this opportunity because others gave me an opportunity,” Khanchat says. “I hope if I grow more, I can hire more people.”