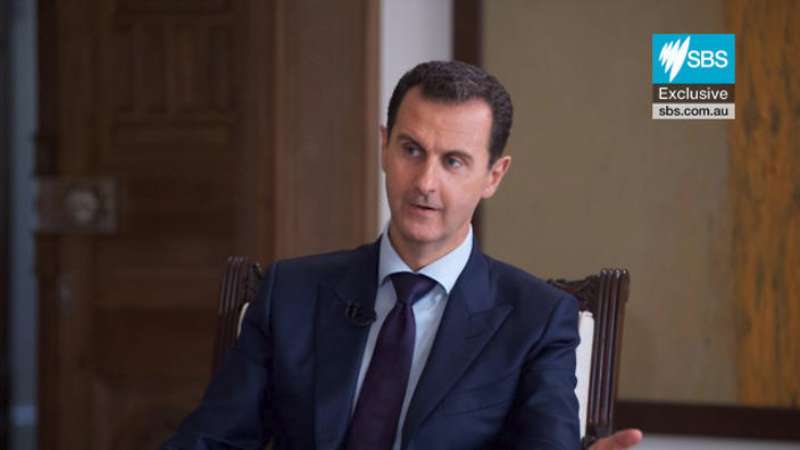 Orient Net
Syrians in Australia issued a statement on Saturday to the Australian Government condemning the “slip” which the SBS TV station fell into, following an interview the station conducted with Assad on Friday.
The statement, which Orient Net received a copy of, read that the assembly “condemns in the strongest terms the major slip that the station fell into when it conducted an interview with Assad, allowing him to direct insults on politics and the Australian Government and to recall the realities of what is happening in Syria of criminality, which he still conducts so shamelessly as Australian politicians get busy with their democratic elections of which this criminal does not know.”
The statement added that “the timing of this interview – which SBS World News reporter Luke Waters claims took two years to secure – serves Assad’s goal of recycling his image and reviving his collapsing regime by giving him a golden opportunity.”
“Perhaps he was looking for it to portray himself as an innocent and to relieve himself from the murder of hundreds of thousands, the destruction of an entire population and the displacement of millions under the pretext of fighting terrorism, as he remains practicing the worst kinds of terrorism and continues to do so daily in front of the world without any serious reaction to stop him.”
The assembly called to “open an investigation and hold those responsible in the management of the SBS for this interview accountable in order to prevent a repetition of such interviews, which ignored the ethics and values of Australia and the criminal character of Assad by giving him the space to throw accusations onto Australia from a platform which is supposed to be a protector and a sponsor of the country’s democratic values.”
“It is also directed against the people who fund this station… It is necessary to apologize to the Australian and Syrian people and the Australian government for allowing for Assad’s groundless accusations of dealing with him privately and erasing the government prints from the station – which prides itself for its neutrality,” adding that “when it comes to crimes against humanity, neutrality takes the side of the killer and becomes a tool in destroying the Australian humanitarian values and its defense of democracy and the freedom of peoples.”
The statement concluded by saying: “This interview has caused great anger, sadness and severe harm to all those affected, especially the Syrian refugees in Australia and elsewhere in the world, who have lost their loved ones, have been tortured and imprisoned, had their homes destroyed and lost everything as a result of the criminality of Assad and his allies.”