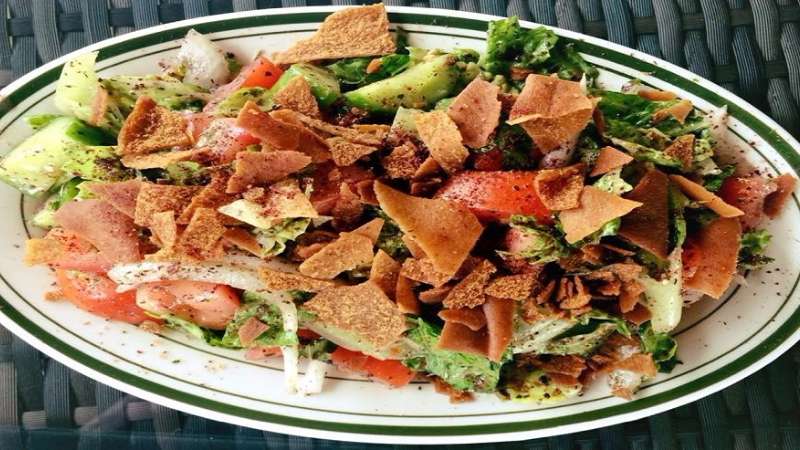 Fatoush is a traditional Syrian salad served where Kamal works as a chef
Orient Net - R. Sikora
When the peaceful revolution calling for government reforms broke out in Syria in 2011, Kamal had been working as a chef in a five-star restaurant in a Damascus hotel.

For 16 years he had been perfecting his trade learning the fine art of cooking French cuisine amidst the glamour of Syria’s capital city.

His specialty was also his personal favorite; cordon bleu, a crispy chicken breast stuffed with succulent cheese, mushrooms and corn.

Like thousands of his fellow Syrians, Kamal was quick to join the peaceful protests calling for democratic reforms from a brutal government that had become steadily more oppressive and was rife with nepotism and corruption.

And like many of his fellow Syrians, Kamal also found himself imprisoned and tortured by a regime that had zero tolerance for any form of resistance to the stranglehold it had on the Syrian society.

For 14 months, Kamal was subjected to electrocution and various other forms of torture as he was moved in and out of detention centers. He even had one of his kidneys forcibly removed by government doctors while in prison.

As soon as he was able, Kamal took his family and moved to Cairo where he applied for refugee resettlement with the UNHCR.

After waiting through two long years of security clearances in Egypt, Kamal, his wife and their three children were approved for resettlement in the U.S.

When he finally landed in Houston in January of 2015, Kamal knew very little English but a year and a half later is working as head chef of the Kaan Café, a Mediterranean/Arab restaurant that had its grand opening at the beginning of this year.

While not exactly the kind of five star venues he had become accustomed to in Damascus, the Kaan Café evokes images of home with its familiar traditional Arabic food, lush Mediterranean décor and softly lilting background music.

Instead of French cuisine, Kamal now delights Kaan Café customers with his mixture of Arabic and English as well as delicious Middle Eastern food like hummus, tabbouleh, baba ganoush and tasty kebabs -- all accompanied with traditional pita bread.

Even after beginning his new life in freedom, Kamal still requires medical treatment for the broken bones and effects of the torture he was subjected to in Damascus.

But he prefers to not dwell on the past. He is grateful to be working again and for the future he and his family have been granted. His fourth child, a daughter, was born in Houston and is a U.S. citizen and of that he is very proud.