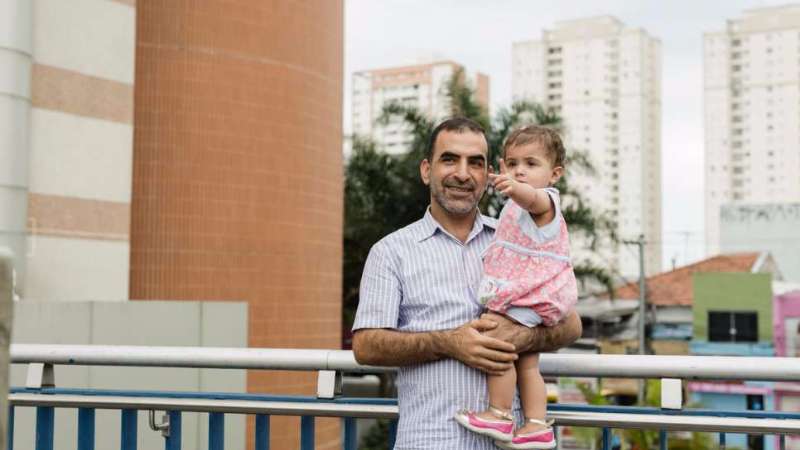 Photo: UNHCR, a Syrian refugee with his daughter in São Paulo

In December 2012, with the war in Syria steadily intensifying, 19-year-old Adel Bakkour was about to begin studying for a chemistry degree in the northern city of Aleppo.

Faced with the likelihood of conscription, Bakkour decided to leave. He crossed the border into Turkey, traveled to Istanbul, and in three days he was on board a plane bound for Rio de Janeiro.

"People here understand the situation in Syria," Bakkour said. "So, when they know where you’re from, you can see that they try to help however they can."

__new_in_first_article1__
But a policy shift regarding Syrian refugees by the new Brazilian government means that stories like Bakkour’s may be increasingly rare. Since the start of the conflict, over 2,200 Syrians have settled in Brazil, the largest group of the 8,500 or so people who have claimed asylum during that period. Although the number may seem small in comparison to the 1.1 million offered shelter by Germany, it dwarves the asylum claims processed by other Latin American countries, and it appeared to be just the start of an even bolder humanitarian policy.

Last September, Oliver Stuenkel, an assistant professor of international relations at the Fundacao Getulio Vargas, wrote an opinion piece in The New York Times calling for the Brazilian government to welcome 50,000 Syrians, arguing that it "would help the country’s economy by reducing Brazil’s chronic shortage of skilled workers and boosting innovation."

Stuenkel was accused by some of wishing to "import terrorism," but it appeared that his words had some effect. Earlier this year, the Brazilian government of President Dilma Rousseff entered into talks with Germany, the European Union and the UN to discuss taking in more Syrian refugees. Shortly before leaving his post in May, Eugenio Aragao, the former justice minister, said the country could welcome "up to 100,000 Syrians, in groups of 20,000 per year."

But, following Rousseff’s suspension as she undergoes an impeachment trial, the new government has decided to abandon these talks.

Bakkour, who still hopes to bring his mother over to Brazil from Aleppo, is alarmed by the decision.

"It will make the Syrians here very uncomfortable," Bakkour said. "Brazilians will think that the government must have done this for a reason - that these people are dangerous."

In the context of Brazil’s deep economic recession, critics of the open-door asylum policy argue that Syrian refugees represent an unnecessary extra cost as well as a potential security threat.

But, for Cecilia Baeza, a postdoctoral fellow in international relations at the University of Brasilia, the majority of Syrians claiming asylum in Brazil "have a level of education higher than the Brazilian average. They represent more an opportunity for Brazil, in terms of competency, than a burden."

For some of Brazil’s Syrian refugees, struggling to make a living in the midst of a severe recession, the decision to limit the flow of migrants appears motivated more by the country’s grim economic reality than by a rise in Islamophobia.
قيم هذا المقال 9 0