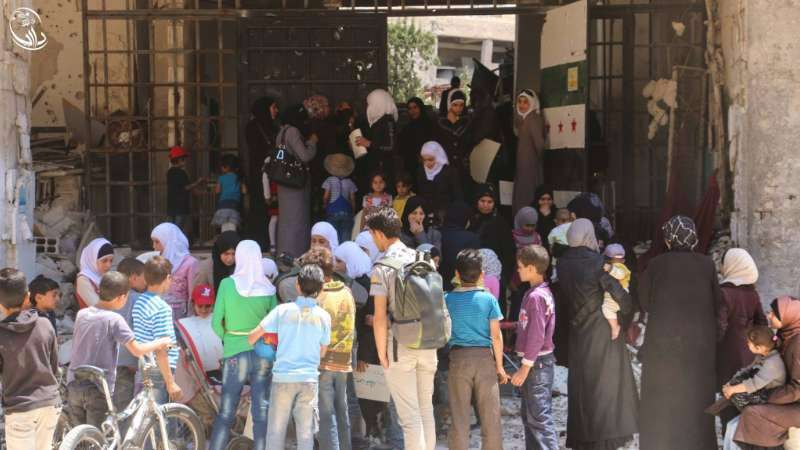 Orient Net - Special
While the people of Darayya gathered waiting for the UN aid convoy to reach them, the Assad regime was preparing a devilish scheme. The regime not only stopped the convoy, but also shelled the location where people were waiting for the medical aid to come. It turned out that the regime’s aim was to kill as many people as it could.

It all started on Wednesday, May 11th, 2016, when the IRCC notified the field hospital in Darayya about their intention to send medical aid to the besieged city on the following day. The IRCC promised to send medical aid and children milk after obtaining the regime’s approval without sending food aid.

In the next morning, the people of Darayya gathered expressing their disapproval of excluding the food aid. The Local of Council of Darayya City has issued a statement disapproving the aid convoys as well. At about 1 pm, the convoy reached, along with members from the UN and the IRCC and the Red Crescent. It was stopped by the regime’s Republican Guards 4th Division check-point for inspection.

The regime officers insisted not to allow the medicine and children milk in. They only allowed the vaccines. Negotiations took hours between the two parties, but with no avail. The task was completely cancelled by Assad regime, eventually, and the convoy returned to Damascus at around 6 pm.

Shortly after that, and while the civilians were still waiting for the convoy to enter, regime military shelled the assembly point with a couple of mortar shells, which resulted in killing two civilians: a father and a son. It also injured 5 more.

The terms which Assad regime set for "the entry of the convoy were unacceptable as they are against the guarantees previously agreed upon,” Stephane Dujarric, the official spokesperson of the UN Secretary General said in a statement on Thursday.

It is worth mentioning that the people of Darayya have been suffering from difficult humanitarian conditions. No UN humanitarian aid has been allowed in since the siege started in 2012. Darayya has been under the barrel bomb shelling for 5 years, which resulted in destroying more than 80% of the houses and the infrastructure in the city and caused thousands of its people to flee.