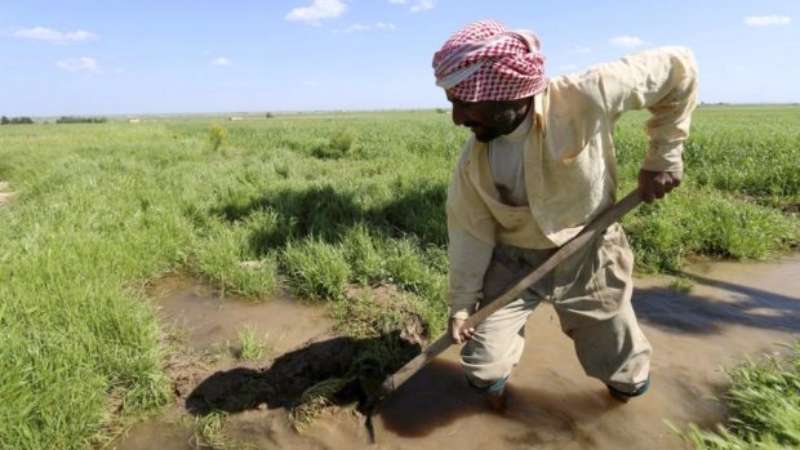 Photo Reuters
Orient Net - Asharq Al-Awsat
In Syria, citizens are suffering from all kinds of hardships. They fear random air strikes, ground attacks, terrorist groups, siege and even seeking refuge. All that is not enough, as the war has also worried the Syrians over farming. The unrelenting violence has destroyed agricultural infrastructure and fractured the state system that provides farmers with seeds and buys their crops, deepening a humanitarian crisis in a country struggling to produce enough grain to feed its people.

The country’s shortage of its main indispensable wheat is deteriorating. The area of land sown with the cereal – used to make bread – and with barley has fallen again this year, Reuters cited the U.N. Food and Agriculture Organization (FAO).

The worsening wheat shortage is another knockback to a country where the population numbered around 22 million before 2011.

Before the conflict, Syria could produce 4 million tons of wheat in a good year, with around 2.5 million tons going to the state and the surplus exported.

The northeast province of Hasaka, which accounts for almost half the country’s wheat production has witnessed heavy fighting between the Kurdish YPG militia, backed by the U.S.-led air strikes, and ISIS militants.

According to the FAO, farming infrastructure, together with irrigation canals and grain depots, has been destroyed. It said the storage facilities of the state seeds body across the country had also been damaged, so it had distributed just a tenth of the 450,000 tons of seeds that farmers needed to cultivate their land this season.

Farmers are also struggling to get their produce to market so it can be sold and distributed to the population.

The conflict has led to the number of state collection centers falling to 22 in 2015, from 31 the year before and about 140 before 2011, according to the General Organization for Cereal Processing and Trade (Hoboob), the state agency that runs them. Many of those lost have been damaged or destroyed.

The FAO expressed concerns that the breakdown of the agricultural system could leave Syria struggling to feed itself for many years after any end to the fighting, and requiring a significant level of international aid.

Furthermore, the war has had a major impact on plantings; the area of land sown with wheat and barley for the 2015-2016 season stood at 2.16 million hectares, down from 2.38 million hectares the previous season and 3.125 million in 2010 before the war, and only around two-thirds of the area targeted by the government, said the FAO.

“What concerns us is not the fluctuations from one year to the other, it is the worrying overall downward trend,” said Eriko Hibi, the FAO’s main representative for Syria.

FAO estimated last year that Syria’s wheat deficit for 2015 stood at around 800,000 tons. That deficit could widen every year should farmers continue to lack access to agricultural inputs and markets, it said.

“Many farmers don’t want to be displaced or give up their land, they want to stay as long as they can and in order to do that they have to be able to produce their food and make ends meet,” Hibi said.

Hibi said that transferring wheat and other food from one province to another is difficult because of lack of security.

“I’ve seen a lot of fresh fruit wasted in some areas where just nearby people haven’t seen fresh fruit for years.”

She said it was still too early to tell what this year’s wheat crop would be, as it depended on the weather. “So far it has been a bit drier but that may change,” she said.

Syrian farmers benefited from the best rainfall in a decade last year and harvested around 2.4 million tons of wheat, significantly better than the drought-stricken year before but still around 40 percent lower than the pre-2011 average.