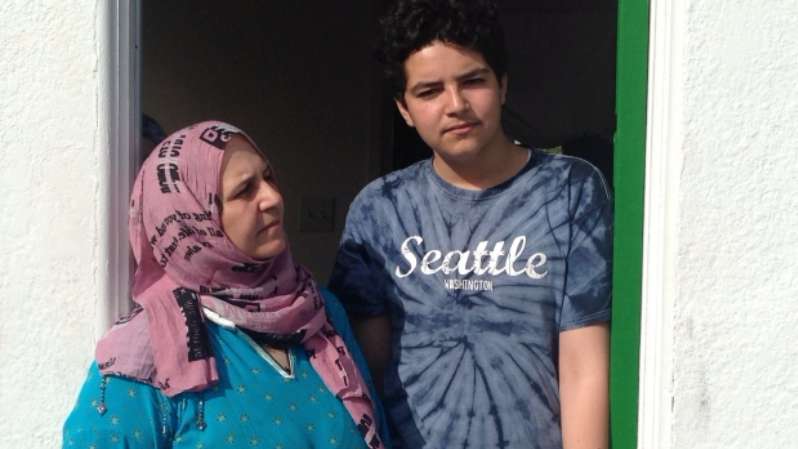 "When we came at first, we have a hope ... but now we lost the hope," said Hatem Alsidawe, through an interpreter.

Alsidawe, 19, has been living with his family — four siblings aged 15 to 26 and his mother, a widow — in a motel unit in East Vancouver since early February.

They’re amongst 121 Syrian families still in temporary accommodations, all of whom arrived before March 1 during the federal government’s push to welcome refugees.

Some of the families are staying in hotels and motels at a cost of $90 to $120 per night, plus $10 per person per day for food.

Alsidawe says ISSofBC — the settlement agency tasked with settling government assisted refugees like his family — hasn’t shown his family a potential home in six weeks. He dubs it the "failure office".

"Every day we talk to them and no one answers, no one replied, no one cares," said Hatem.

"They don’t even look to us, they don’t give us the answers. They just kind of ignoring."

And some of the families are proving particularly difficult to house.

Two of the Alsidawe daughters are disabled. A nerve problem called neurogenic atrophy means they have little to no movement in their lower bodies.

The family has been shown several potential homes, but turned them down because they didn’t have a bathroom big enough for bathing the disabled young women.

Their mother, Fayzeh Ramadan, says the motel bathroom is small too, meaning her daughters have had only one bath in the past three months.

Her 15-year-old son, Mohamed, hasn’t been able to enroll in school because they don’t have a permanent home.

"We’re sitting here in the house, just like a jail for us," she said through an interpreter.

Friesen says the agency’s goal is to provide each family with up to two housing options, something that’s been done in most of the outstanding cases.

"Most of the families that have been with us now for some time have received permanent housing options, but for a variety of reasons have chosen not to move. So it’s a complicated process, and we are equally frustrated."

Friesen said three families that arrived in B.C. at the end of December 2015 are still in temporary housing.

Yussef AlSulaiman, his wife, and five young children are among them.

Over four months, they’ve been bounced from a hotel in downtown Vancouver, to one in Surrey, and have now been relocated again to the ISSofBC Welcome House.

"He is really fed up, it’s just too much. He has children, he wants them to go to school, he wants to find a job, they want to find a life," said an interpreter for AlSulaiman.

AlSulaiman says they’ve been shown three houses. Two were basement suites, one with only one window, in the kitchen.

He liked the third, a home in Langley, but says settlement workers told him it was too small for his family.

AlSulaiman emphasizes that he’s grateful to Canada, but says he’s getting inadequate help from settlement agencies.

"IRCC also informed families that they could not remain indefinitely in temporary housing, when suitable options were being provided to them," wrote spokeswoman Jessica Seguin in an email.

"In some cases more than six options were presented in efforts to please clients."

Friesen said he’s confident that all of the initial wave of Syrian refugee families will be in permanent housing in "the very near future."