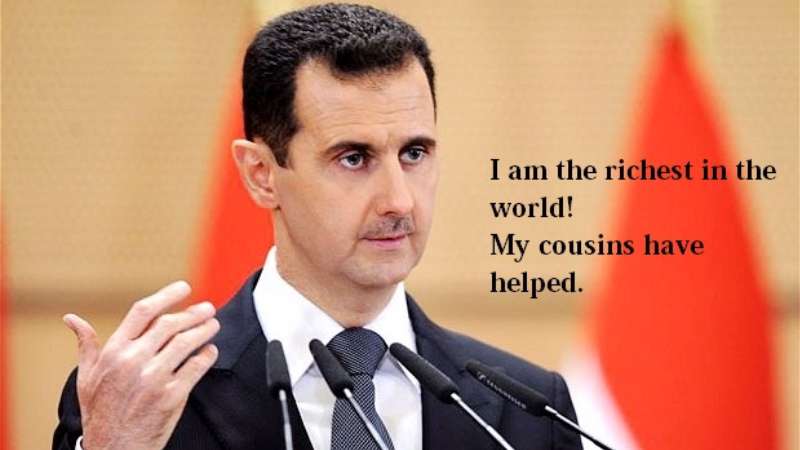 Orient Net - Bloomberg View
Syria’s democratic opposition is combing through this week’s release of the Panama Papers to revitalize efforts to identify and freeze billions of dollars amassed by the family and friends of their country’s dictator, Assad.
The papers have uncovered a web of shell companies and offshore accounts hiding wealth tied to prominent officials around the world. Among them are new disclosures about Rami and Hafez Makhlouf, the cousins of Assad who are estimated to have once controlled more than half of Syria’s economy. The papers also document millions of dollars’ worth of real-estate holdings belonging to Suleiman Marouf, an Assad ally based in London.
The Coalition for a Democratic Syria said this week the new information could be a map to uncovering Assad’s ill-gotten wealth.
“For decades, the Assad family has stolen billions from the Syrian people and used it to fuel their indiscriminate slaughter, but we can now point to an exact path for these funds,” said Yahya Basha, the coalition’s chairman.  “We call on all bodies of the U.S. government to work to stop this despicable practice.”
The Panama Papers come to light at a moment when the U.S. government has reduced the public pressure on Assad. Until recently, the Obama administration had called on Assad to step down from power. President Obama himself argued that after Assad turned his military on the civilian population in 2011, he lost legitimacy.
Panama papers give Assad’s opposition a new form of leverage against his regime: money. "The initial challenge in doing asset recovery is identifying assets and being able to prove those assets are stolen, to prove the nominal owner is not the rightful owner," said David Tafuri, a lawyer who has worked with Libya’s transitional government and Syria’s democratic opposition on asset recovery.
Hafez, Rami’s brother, was the head of Syria’s General Intelligence Directorate and has been sanctioned by the U.S. since 2007 as part of an effort to punish Syrian leaders for undermining the sovereignty of neighboring Lebanon.
In May 2011, a few months into the Syrian regime’s crackdown on public protests, the EU sanctioned both brothers. Those sanctions extended to the British Virgin Islands, where the shell companies controlled by the Makhloufs were incorporated. The financial investigation agency of the British Virgin Islands at that time was already months into an investigation of Drex Technologies SA, the shell company Makhlouf used to control Syriatel, Syria’s biggest telecommunications firm.
The papers have disclosed new information about three shell companies used by the Makhlouf brothers -- Pangates International, Maxima Middle East Trading and Morgan Additives Manufacturing. Despite multiple warnings, Mossack Fonseca officials remained on the boards of the Makhloufs’ companies until September 2011. Mossack Fonseca, according to Le Monde, continued to advise Pangates International well into 2012.
The documents also show that HSBC helped the brothers maintain their Swiss bank accounts even after the two came under scrutiny from the EU in 2011 for their role in the military campaign against Syrian citizens. HSBC also repeatedly advised Mossack Fonseca to continue doing business with the Makhloufs. HSBC however froze the Swiss bank accounts affiliated with the Makhloufs in September 2011.
For the Syrian opposition, getting Assad’s money is not the most important issue. The larger goal is to pick away at the legitimacy of the Syrian regime and the banks and lawyers who enable it.
Eli Lake and Josh Rogin in Bloomberg View.