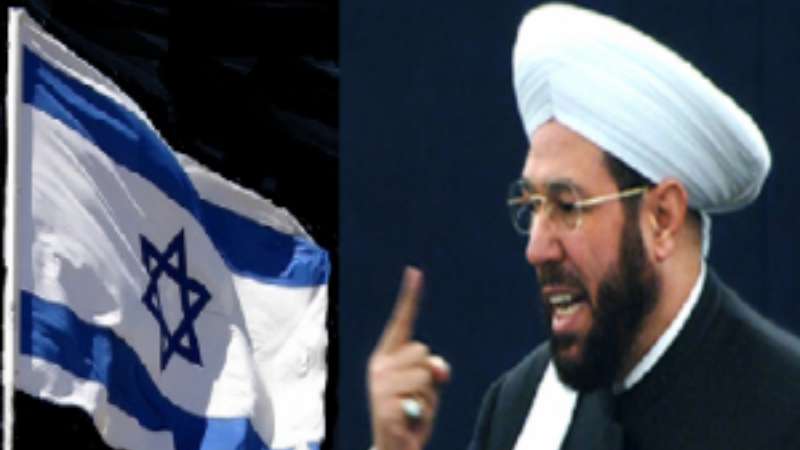 Orient Net - Jamal Mamo
Assad regime grand Mufti Ahmad Hassoun, known among Syrians by “barrel-bombs mufti” for his notorious call to bombard all opposition-held areas by barrel bombs, has spoken lately to the Iranian-funded TV Channel of Al-Mayadeen.
Hassoun was interviewed by Ghassan bin Jiddo, the manager of the channel in order to deny the recent rumors about his escape with his family and money to Oman but the real message that lies behind that lengthy interview was another purpose. The real addressees were somewhere else other than regime’s audience whose worries do not need the appearance of the grand mufti on TV to be comforted or relieved.
Hassoun spoke to his host about the “false allegations” used by Syrian opposition and mainly Islamic movements which say that Assad regime has been following “anti-Islam” policies in Syria, adding that Assad regime has been keen on promoting Islam and encouraging Islamic education in the Syrian society since 1970. Hassoun mentioned that the number of mosques were 7000 in 1970 but the number increased to 27000 in 2010. In the same context, Hassoun underlined Assad’s care for religious teaching through the rise in number of religious schools, where Sharia law is taught. The number jumped from 3 schools in 1970 to 110 schools in 2010.
However, Hassoun didn’t mention first that a great number of these mosques were destroyed in shelling and bombardment by Assad forces during the last five years. Going deeper into what the mufti considers a big achievement by Assad, the game looks bloodier and more demonic. Syrians and experts in the regime’s politics and their social mechanisms know that Assad followed a very cunning strategy in terms of promoting radicalism and containing its power to serve his multi-purposed agenda.
Assad always wanted through that policy to show the West that he represents the “secular” and “modern” version of ruling. But since that aim can’t be achieved unless it is being put in contrast with somebody who represents the opposite side, he worked hard to create the “ghost” by which he blackmails and intimidates the other. Assad wanted to show western powers that he is controlling “extremist” people and his legitimacy stems from limiting their danger that threatens the west’s interests and security, i.e., to show that you look “white” you should put someone “black” next to you. In this respect, it would be good to remember the violent demonstrations which took place in Damascus in 2006 during which angry “protesters” -- who turned to be members in Assad secret police -- set fire in the embassies of Sweden and Norway. So, Syrians who are known to be moderate Muslims were pushed through systematic efforts to be radicalized in a way that can be always monitored by the regime’s secret eyes and ears.
Assad’s mufti went on speaking about Syrian opposition which he describes as either being deluded and misguided or by power-thirsty seekers. The mufti mentions some regional powers which have been pushing Syrian opposition to “destroy” their own country as if the Syrian opposition figures -- which the mufti claims that they were given freedom to work and were never jailed by Assad -- had artillery and missiles that destroyed the country.
However, avoiding the hen-egg debate about who started violence would be better in this respect but it would be reasonable though to discuss the issue of seeking power by the opposition which is a very legitimate demand to claim. All political parties in the world compete and run campaigns to win the power! The debate here from the regime’s perspective looks disfigured since the regime’s advocates such as the mufti believe that power is a means to oppress and make illegal fortunes while it is and should be a means to implement the vision of certain political power and its set plans to build a prosperous city.

Depicting others by being power-thirsty reveals how the regime understands the word power. It is the magic that keeps Assad in control, oppressing and stealing without being held accountable for his deeds. So, naturally the word "power" for Hassoun would have negative connotations since it means Assad’s concept of “power” but not what it means in the whole modern world.

The mufti had better shamed those who have been clinging to power after killing more than half a million and causing the worst human catastrophe since WWII than trying to mar the opposition by being power thirsty seekers.