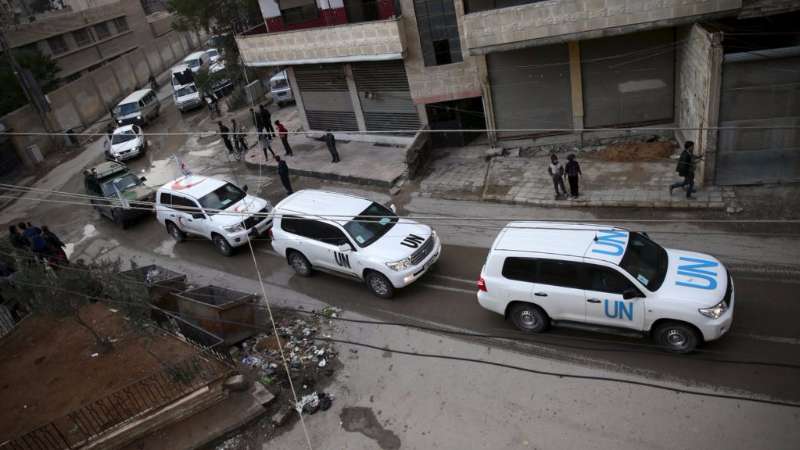 Orient Net - VOA
The U.N. humanitarian chief said Wednesday that since January aid workers have reached nearly 400,000 Syrians in besieged and hard-to-reach areas, but continued safe access is urgently needed to reach millions more, Voice Of America reported.
Stephen O’Brien told the Security Council in his monthly briefing that many of the 4.6 million Syrians living in besieged and hard-to-reach areas still remain beyond help due to insecurity and obstructions by the warring parties.
“In 2016, so far we have only reached some 30 percent of people in besieged areas and less than 10 percent of people in hard-to-reach areas,” O’Brien said. “Humanitarian conditions remain dire throughout the country, with some 13.5 million people remaining in need,” he added.
O’Brien said that the Assad regime continues to withhold approvals on access to certain locations. “From the recently submitted plan for cross-line convoys in April, only six of 11 locations were approved by the Assad authorities, and for some locations, they specified the delivery quantities that would mean we could cover only a portion of the population in each area,” he said.
He also blamed the Assad terrorists  for excluding and removing medical supplies and treatments from aid convoys. O’Brien said this year 80,000 medical treatments have been removed or excluded mostly by the Assad regime.
“The range of removed items is scandalous – from items to treat child malnutrition to medicine for preventing bleeding after childbirth,” O’Brien told the council.
ISIS is also an obstacle to aid deliveries in the eastern city of Deir Ez-Zor, which is largely under the control of the terror group. There, the UN has started high altitude aid drops with minimal success in a bid to reach some 200,000 besieged people.
O’Brien urged support for UN-led peace talks on Syria, saying “peace cannot wait any longer in Syria.”